G20 and the McGuinty government

As such, in recent days, I’ve received many emails and comments and calls from folks about what the McGuinty government did, or didn’t do, in respect of the G20. Specifically, the allegation that a law was passed secretly to trample on individual liberties, etc.

I got in touch with people I know in the government. Here is what I can report about the three main criticisms, which are:

1. That the McGuinty cabinet passed new, sweeping/extended/expanded powers for police.

2. That they did so in secret.

3. That these secret new sweeping/extended/expanded powers were what the police used to arrest people, arguably unconstitutionally.

None of the above, I can report, are true.

The Public Works Protection Act has been in place since 1939. It is what is used in courthouses, city halls, police stations and airports to protect citizens and promote security and so on. The relevant part of the Act, today, is the part where you may be asked to produce identification, and have your bags possibly searched, in order to gain admittance. Using the air travel example: you have to show ID, and your bags, prior to boarding the airplane. If you don’t want to get on the plane, you don’t have to do those things.

The same rules were in effect, my sources tell me, to gain entry to the security perimeter (the inner fenced-in portion). That is, you can choose not to show ID or allow your bags to be searched in an airport, but it means you’re not getting on the plane. The same requirement was in effect for the G20 – but, there, it meant you weren’t getting in, near or behind the security perimeter. As at an airport, if you were asked to show ID or to show what you were carrying in your bag – and you refused and still tried to hang out and (possibly) cause trouble – you ran the risk, but not the necessarily guarantee, of arrest.

Next, I asked about this “new” power. Was it needed? Who requested it? Why? Good questions.

I was told police already had this power – both in the above-noted public works legislation in court houses, etc., and through common law for just about anywhere. What Toronto Police asked was to codify the security perimeter fence in regulation for greater clarity. The McGuinty government did that.

Now, the “secrecy” allegation: I was told the notification about the rules were posted online on June 16, many days before the summit. On June 21, the City of Toronto and the joint police forces took out ads in the Toronto Sun and Toronto Star and quite a few community papers. Those ads ran throughout the week, and again on the G20 weekend. The ads specifically said that, if you come down to the security fence you will be asked to show ID and – at police discretion – could be subject to a search. That ad is below.

Finally, on the actual arrests and protests. As far as anyone in the McGuinty government knows, and according to what the Toronto Police Service has told them, nobody was arrested under this public works regulation. As one senior Liberal told me: “People may be upset that police were able to search their bags or ask for ID on the corner of Bay and College, or Queen and Spadina, or sitting in Queen’s Park. I understand that. But the police always had that authority as it is – it had nothing to do with any recent regulations we had passed.”

There you go. That’s what I have been able to find out. Comment away. 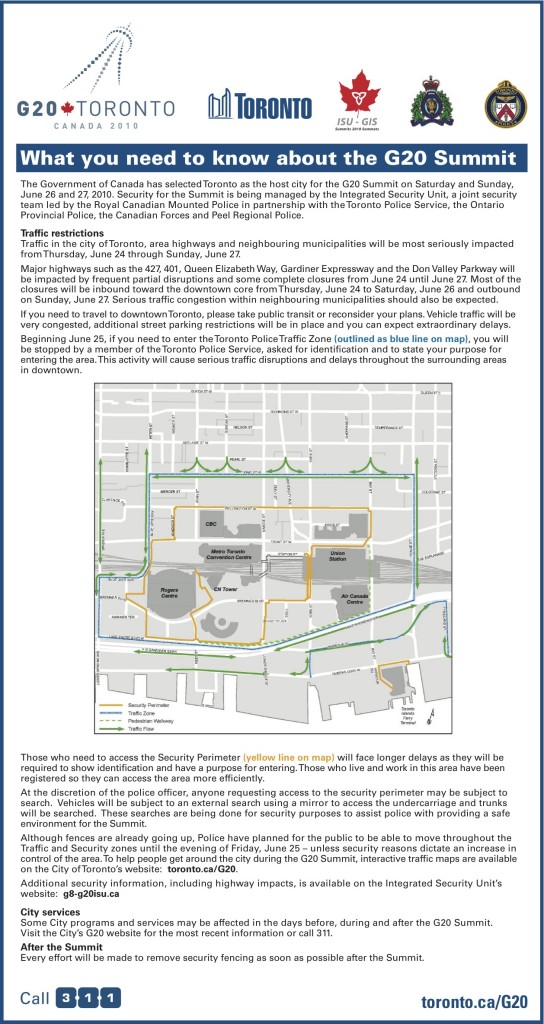