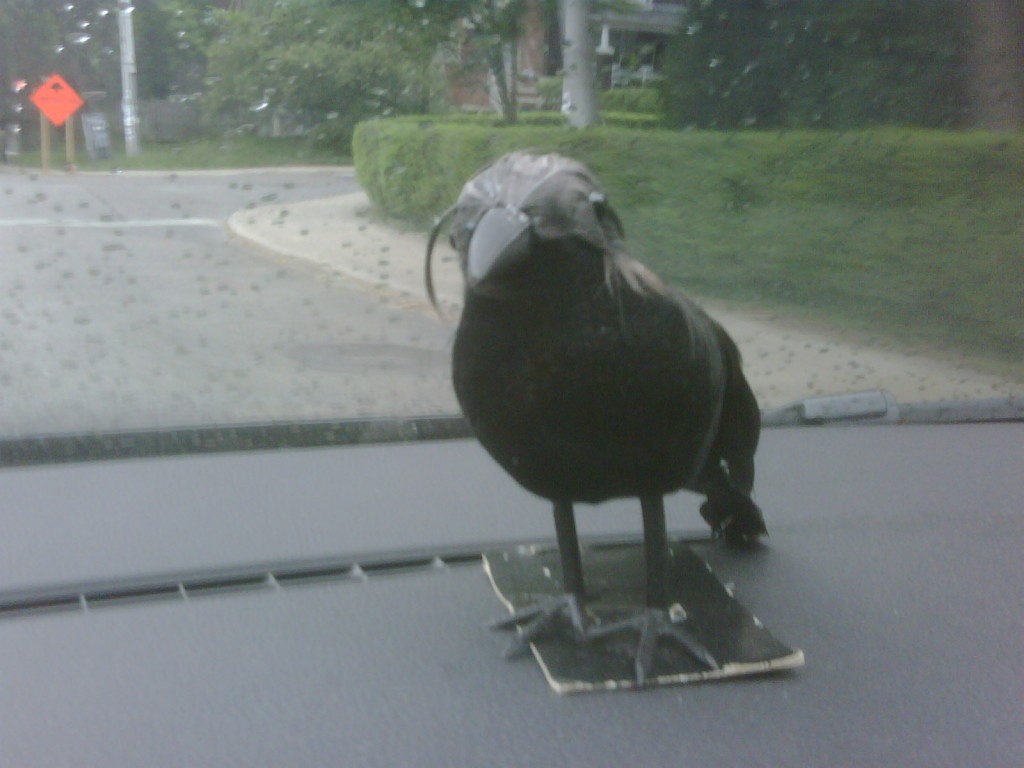 International symbol of the proletariat and the oppressed. Ca-caw, ca-caw.

Roger is a fake crow I bought at a dollar store in Maine last Summer.  I put him on the dashboard of my car.  The kids thought it was funny.

So, there we were on Sunday night – me, my daughter and Roger the Crow.  We were driving West on Lakeshore Drive to get near the Much Music Video Awards ceremony, so my daughter could take pictures of a clothed Miley Cyrus.  She was excited.

We stopped for a red light, tunes cranked on the radio. A shiny new van pulled up beside us.  Inside it, five uniformed cops were sitting.  They turned and regarded us.  We smiled; they didn’t smile back.  The cop behind the wheel signalled for me to turn down the music.  I did.

He pointed at Roger.

“What is that for?” he said, unsmiling.

“That,” he said, pointing at Roger, as the other unsmiling cops watched.  “What is the meaning of that?”

The cop nodded and continue to look at us.  He didn’t seem to think Roger was funny.

The light turned green.  We gave the cops a friendly wave, and drove on.  My daughter looked uncertain.  “What was that all about?” she asked.

“You got me,” said I, heading toward Much Music.  “Maybe they thought Roger was a terrorist symbol or something.”

“That’s stupid,” said my daughter, who is fourteen.

“There’s a lot of stupidity going on for this G20 thing,” I said. “I don’t see a whole lot of good coming out of it. I mean, they’ve already written their dumb communique in advance. Why are they even meeting here? Why didn’t they hold their meeting on an island up in the Arctic Circle?”