Martin Patriquin is one of the biggest scumbags in Canadian journalism. This week, we’re going to be hearing all about Patriquin, because he has written Maclean’s cover story, which looks like this: 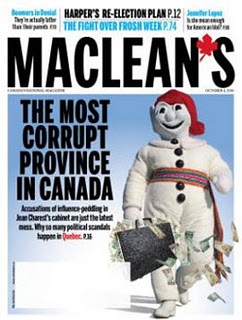 If that seems familiar to you, that’s because it is.  Here’s another Maclean’s cover story, also written by Patriquin: 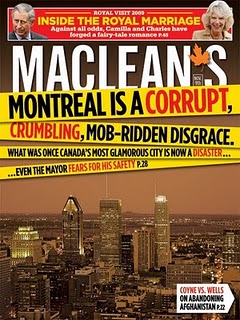 So, not only is he scumbag, he’s not very original.  He’s also a phony, turns out.

Uh-huh. You guessed it: here’s Patriquin’s blog, in Maclean’s. You know, the one he said he’d never do, because it’s a “bad idea.”

My personal experience with Patriquin is not dissimilar.  He reprints Conservative Party talking points, is regarded as a cynical no-talent by his more-accomplished colleagues, and sends over-refreshed emails to people in the middle of the night.  He thinks he’s clever, but he isn’t.  He’s a loser.

So how is it that he’s employed at Maclean’s? Beats me.  But the magazine also retains the services of Mark Steyn, so that might have something to do with it.  Steyn, as you know, is a former disc jockey who calls the Chinese “chinks” and “gooks,” the Japanese “japs;”  Indians “wogs;” natives “Injuns;” Muslims “monkeys” and rapists, and so on. He also suggests the disabled more or less got what they deserved in 9/11. Birds of a feather publish together, I guess.

Anyway.  As Norman Spector has pointed out, Patriquin’s “story” declines to provide the reader with a study – any study – that proves that Quebec is “the most corrupt province in Canada.”

They won’t, either, because no such study exists.  Patriquin just made it up, and someone at the magazine went along with it because they thought they’d dazzle a few more dentist waiting rooms with their wit. Personally, I hope every person in Canadian public life – and every person – kicks the living shit of Matrin Patriquin and his magazine this week.  They richly deserve it.

Oh, and corruption?  Corruption is defined as “a lack of honesty or integrity.”