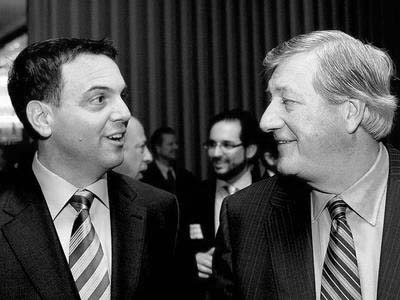 The source of his inspiration.

One year from today, Ontario will go back to the polls.  We Ontario Liberals are already at work, and in fact have been at work for months.  We intend to continue to work very hard, to once again earn the confidence of the people.  And we intend to take our opponents very, very seriously.  We don’t, and will not, take anything for granted.

That’s because the choices are starkly different, and the consequences of making  the wrong choice are pretty significant.  So I think Ontario voters need to start pondering what would be the consequence of a win by our principal (but by no means only) opponent, Conservative leader Tim Hudak.

Here’s a very short summary of Hudak’s views and positions, mostly derived from his tenure as a Mike Harris disciple.  In the year ahead, you will be hearing a lot more about these.  Consider them carefully.  If you feel as I and many others do, we need to once again cast a vote of confidence in Dalton McGuinty [full disclosure: whose caucus I’ve given comms advice].

In the year ahead, you’ll be hearing more and more about these and other concerns.

And in the year ahead, you will hopefully come to know – as I do – that Dalton McGuinty is a builder.

Tim Hudak and his cabal, meanwhile, are the wrecking crew.