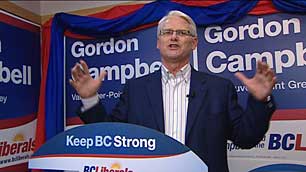 I met Gord Campbell in the Fall of 1993, when I went out to B.C. right after our big federal election win.  I was exhausted, but I spent a lot of time with Gord and his then-small caucus, giving them tips on how to make better use of Question Period and how to be a better Opposition.  Out of that experience grew a friendship that culminated in my family’s move to B.C. in 1996 – if the Martin-era Liberals didn’t want me around, the Campbell Liberals did.  I helped to run the B.C. Liberal’s 1996 campaign, wherein we got more votes but less seats than the NDP.  Afterwards, Gord offered me the job of his Chief of Staff.  (I turned it down because I wanted to seek the federal Liberal nomination in North Vancouver.  Bad career move.)

Anyway, I have always liked and admired Gord Campbell – very few people know the adversity that he and his family faced, growing up – and I believe he is a good man.  He did great things for B.C.

I wish him the best in whatever he does next.