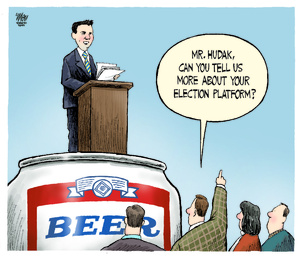 Last week, Hudak’s office stated clearly that “if elected premier, he would not cut the health tax or Ontario’s health care budget.” Tory MPP Sylvia Jones followed that up by repeatedly accusing Liberal Health Minister Deb Matthews of “lying” for saying that Hudak intended to cut the $3-billion health premium.

By Monday, Hudak had reversed himself (and Jones). He said cutting the health premium, which costs taxpayers up to $900 per year, is still “on the table.”

Amid all this flip-flop and beer talk, though, remains a more serious issue: What is Hudak’s health care plan?