“Property rights” in the Constitution

…that’s what Tim Hudak’s PCs want. What does it mean for you?

It’s crazy. And it raises the key question: where does Tim Hudak stand?  Is the No Plan Man© now, fully, a hostage of a cabal of lawless rural extremists? 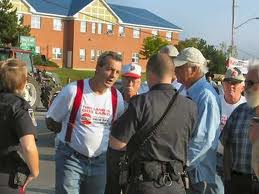 Hillier, the real PC leader, in handcuffs at an OLA protest.