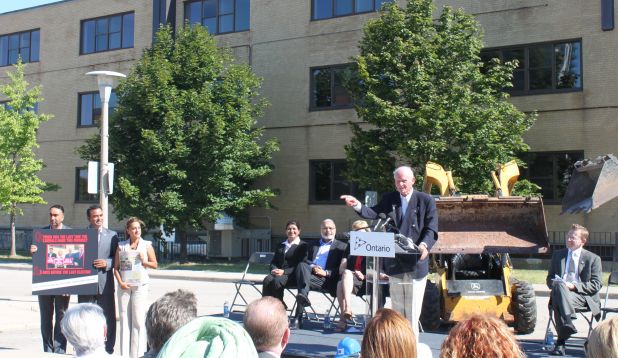 Check this out. I would not have believed it had I not seen the photograph with my own eyes.

It is a picture of three Hudak minions, to the left – all of them sad-sack Hudak candidates, Pam Hundal (Brampton-Springdale), Sanjeev Maingi (Bramalea-Gore-Malton), Amarjeet Gill (Mississauga-Brampton South) – actually disrupting a speech by former Ontario Premier Bill Davis, to the right and onstage.  They’re holding a sign that says “don’t let them fool you,” and it includes Tim Hudak and Ontario PC hash tags.

In Brampton, no less.

Davis was there to talk about health care and leadership at the local level. I don’t know (yet) how he reacted to this stunt.  But I can say that protesting us is fine. But disrupting a speech by their former leader? Seriously?

What a disgrace Tim Hudak is.  What a total buffoon. First he plunges a drawerful of silverware in John Tory’s back, and now he’s sending out candidates to disrespect one of his party’s true remaining statesmen.