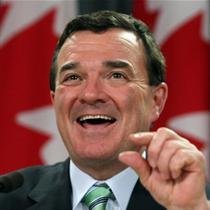 He’s a little man, with a little man’s perpetual sense of grievance.  So when he practically invites credit agencies to downgrade Canada’s largest economy, and when he takes potshots at Dalton McGuinty and Dwight Duncan, as he did again today, it’s only because he still possesses a little man’s rage that he has been beaten – every time – by men who were smarter and better than him.

Conservatives keep hoping he’ll come back to Toronto to take over the wreck that is the Ontario PCs.  I hope he will, too, and not just because of the endless entertainment it’ll provide.

Flaherty won’t ever slink back, however, because he knows we’ll grind his face in the dirt, just like we did every time before.