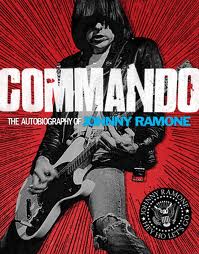 I bought Johnny Ramone’s posthumous biography a few days ago, in Belleville, on the way up to the cabin. I liked the cover, above, and the design. I’m a sucker for great design, which is why I loitered at the National Post longer than I should have.

I bought Commando because the Ramones made the greatest album in the history of the world, and because – for the first four LPs, at least – they were the greatest band on the planet.  They were perfect.

I read it in a couple of nights.  The book is a first-person account of the life of the Ramone’s one and only guitarist.  The project was overseen by Ramone’s widow and one of his closest friends, which is one of the main reasons why it is such an eminently dislikable book.

Being an Irish Catholic, all of you know how much I fear speaking ill of the dead.  It’s a really bad idea; it’s dangerous.  The subject of the criticism never hears about it, and the author of the criticism usually ends up looking like a creep.  So I don’t do it.

Commando, however, will persuade you to speak ill of the dead – in this case, the former John Cummins, who has been dead for nearly a decade.  In this slender tome, Johnny comes across as a bigot (people he doesn’t like are “faggots”), a Right-wing loon (he lionizes Ronald Reagan and John Wayne, and he calls anyone to the Left of George W. Bush a “commie”), and an asshole (he repeatedly smears Joey, Dee Dee and Marky Ramone, but never once apparently considered breaking up their profitable partnership, or even getting their side of the story).  He comes across as an unmitigated jerk.

Any of us who are into punk rock always knew that Johnny Ramone was a grouch, and a conservative.  But what I didn’t know – what a lot of punks didn’t know, I suspect – was what a crummy person he was.  And that he himself would provide the evidence of said crumminess.

If you love the Ramones, don’t read this book.  It always sucks to discover one of your heroes is a jerk, and that’s all you’ll discover in Commando.