Burn in Hell, One Direction 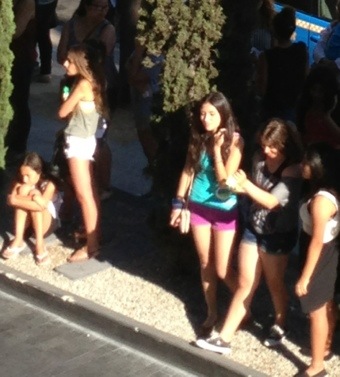 This is the scene outside our hotel, the Andaz, a.k.a. The Riot Hyatt. Where Keith Richards threw a TV set out of his room window. Where Jim Morrison was evicted for hanging off a balcony. Where Led Zeppelin stayed, and conducted…experiments.

This is the scene now, at this fabled rock and roll hotel. The British boy band, One Direction, has attracted scores of prepubescent girls, who shriek and gawk and take pictures at all times of day and night. They’ve been here for days.

One Direction, that is. I wish they would go away, and take their retinue of sidewalk-squatting fans with them. The ghosts of Richards, Morrison and Bonham deserve to be respected.

Not treated to this Hellish scene.