By-election Olympics: Trudeau gets gold and silver; Harper and Mulcair get bronze

Not sure what I mean? Take a look at this chart that I found over at Maclean’s: 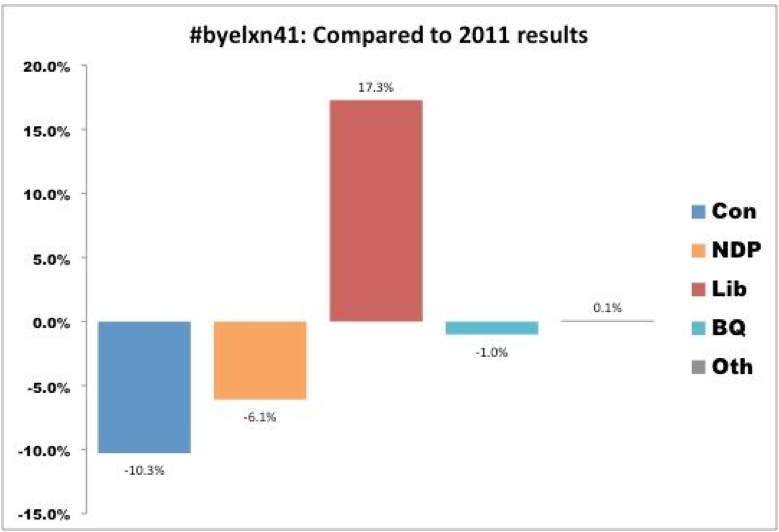 That chart shows, rather dramatically, that Trudeau’s Liberals gained vote everywhere. Everyone else lost vote. And, in Brandon-Souris, of course, my friend Rolf Dinsdale wiped out the 55-point advantage the Cons had in 2011 – and came within less than 400 votes of making history.  Rolf should be proud of himself; I know I’m proud of him.

The Reformatories will say that by-elections don’t ever go well for governments, that the status quo (two Liberal seats, two Conservative seats) is fine by them, blah blah blah. But the reality is this: they came within a whisker of losing a seat they’ve held for most of the last Century. And their share of the vote has plummeted across the board.

Mulcair will also make the status quo argument, and will say that his candidate did very well in a Liberal stronghold (which is one of the reasons why I opposed Freeland, and the way in which she came to be the Liberal candidate). But the reality for is this: Jack Layton he is not. The Orange crush? It may be orange, but it ain’t crushing anyone.

Trudeau won big, last night. He won the gold and the silver. The Liberal Party of Canada, as some of us have been saying for a long time, is back.