Toronto needs a mayor: the only reason they lined up for your bobbleheads is ’cause they think you’re going to be dead, crackhead 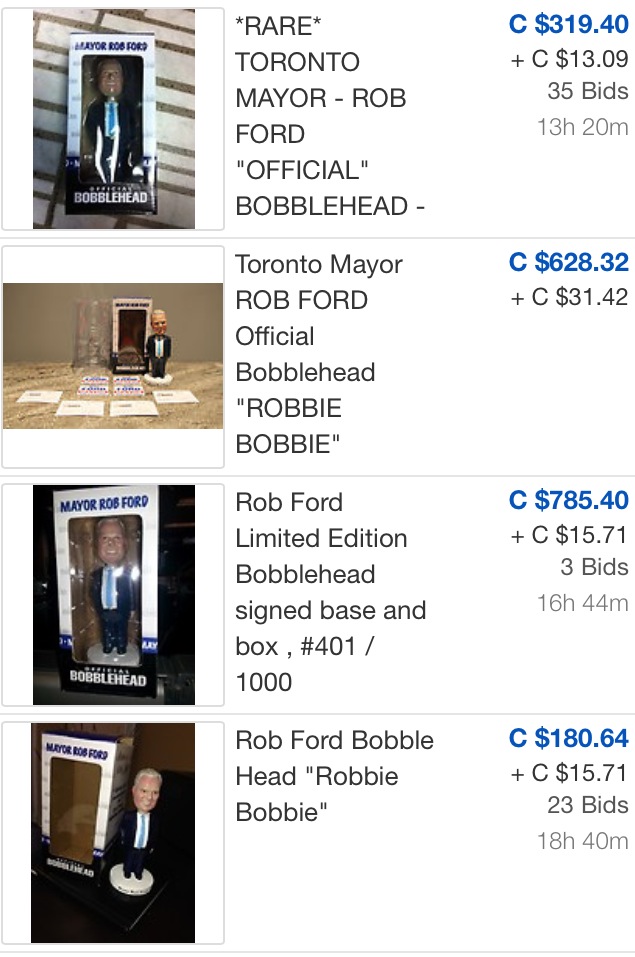 Why they lined up for Crackhead’s Bobbleheads.

Rock’n’roll axiom: you always sell the most records when you kill yourself.

Toronto, ON – On the heels of an admission and apology by Toronto Mayor Rob Ford for a series of drunken behaviours, including one where he was caught on tape smoking crack cocaine – an allegation he has repeatedly denied – a new Ipsos Reid poll conducted exclusively for CTV News/CP24/CFRB Newstalk 1010 Radio has found that just one quarter (24%) of Toronto residents believe that Mayor Ford should remain in office, while the rest (76%) believe he should either resign permanently and stay out of politics (41%) or take a break for treatment, come back in a few months and run in the next election (35%). Moreover, few (30%) believe his plan not to resign or take a leave of absence and stay on the job working for taxpayers until the next election is acceptable.

Just one quarter (24%) of Torontonians believe Mayor Ford should ‘do as he says he will: stay in his job, not repeat any previous behaviour, get back to work because he loves his job and wants to fight for taxpayers and then let people decide in the 2014 election whether he stays on as mayor or goes.

Most (76%) Torontonians, however, Want Mayor Ford to Step Down Now

Four in ten (41%) believe Mayor Ford should ‘resign as mayor, get treatment for his admitted conditions and get out of politics all together because he should not be in elected office’. One third (35%) are more lenient, believing he should ‘step aside as mayor and have someone temporarily be in his place, go into a treatment program for three or four months and then return and resume his role as Mayor to run the city and in the Toronto Election of 2014’.

Since his apology, Mayor Ford has said he won’t be drunk again in public and will not resign or take a leave of absence for health treatment, and that he will stay on the job working for taxpayers who can then vote on October 27, 2014, in the Toronto municipal election and determine his political fate.