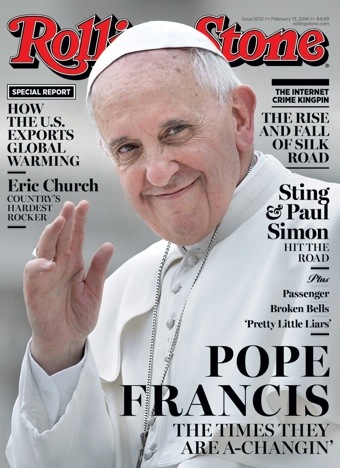 But I understand why Rolling Stone did it.  This guy – as I said to my former Boss last week, a notable progressive leader himself – is the most famous progressive leader in the world.  If he is not stopped from carrying out long, long overdue reforms, I now believe Pope Francis can change the Catholic world – and, perhaps, the greater world beyond that.

I am a regular church-going Catholic (lately, twice a week) – and I favour the ordination of women, the recognition of Catholic gay marriage, and women’s reproductive freedom.  I’ve always been in a Catholic minority (I think) because of that, but the smiling guy up above is giving me hope that may not always be the case.

Comments are welcome, as always.  But be civil, or you’ll be excommunicated from this web site.