On judgment, and Trudeau’s apology – and you, dear reader

Since Justin Trudeau made a very bad joke about the Ukraine and Russia and the Olympics, on the weekend, folks have been weighing in on this web site. The vast majority have disagreed with my view that (a) he should have apologized and (b) he should have done so immediately.

I won’t name names, but to those commenters who aggressively defended what Trudeau said, I say: you are starting to resemble the Conbots you used to (rightly) condemn. You have fallen in love with the meat, as I sometimes indelicately put it, and that is a bad, bad thing.

Here’s what you owe Justin Trudeau, or any politician you work for/with: YOUR JUDGMENT. You owe them your view, honestly and clearly expressed. Not ass-kissing bullshit.

You want to know one of the principal reasons Conservatives are turning off Canadians? Because they treat every bit of dissent as treason. Because they never tolerate any disagreement, no matter how reasonably expressed. Because, intellectually, they are lemmings.

Don’t be a lemming: tell the truth. And when your leader screws up – and they all do, sooner or later – tell him or her the truth. 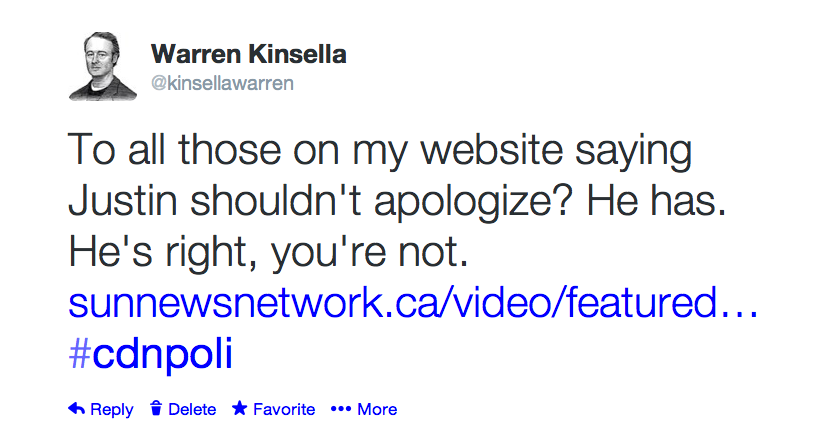