Update on the email from the John Tory fan

Put the (now much-read) email up this morning, here. People said I should go to the cops, sue, etc. Instead, I figured I’d give the John Tory campaign an opportunity to respond to her claim that she was working in their campaign headquarters just last week. Maybe it wasn’t true, maybe she was a crank, etc. So I waited.

So then I wrote to Tom Allison, who is supposedly the top guy over there. On that Facebook message thing, I gave him the whole email and her name, contact info and so on. Here’s a screen cap of the Facebook exchange: 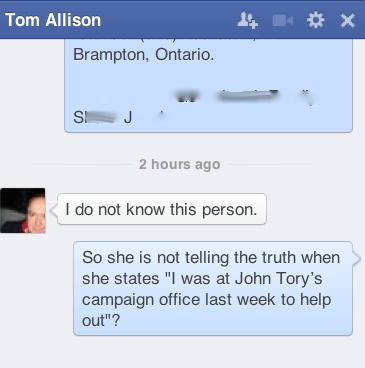 Kind of terse response from Tom, eh? In any event, he still hasn’t responded to last question, there, which I don’t think is an entirely unreasonable one: is she telling the truth or not when she says she’s worked in your campaign headquarters?

The silence suggests that Tom (a) is a busy guy, or (b) “S.J.” is indeed a Tory campaign worker, and they’re having a Tory-style meeting involving 15 people to agonize and dither about what to do.

Anyway, if they think I’m going to let this one go – well, they’re more out-of-touch than I thought.