Whither goest thou, Justin, in thy shiny car in the night?

It’s a Kerouac line, adapted for the circumstances. Fits.

Lately, I have been peering at this snapshot taken by Eric Grenier, like someone does when they are lost, and they are squinting at a map at the side of the road. Night falling, apprehension rising.

No single poll is reliable anymore. They get it wrong, a lot. This graph is probably different, however, because it is a rendering of a lot of polls, aggregated. It’s therefore harder to dismiss. Thus, I gaze at it, trying to unlock its mysteries. 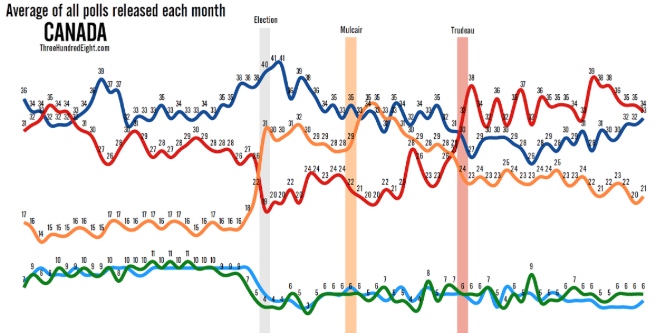 You can divine its meaning as well as I can. You don’t have to be an expert. Among other things, it tells us:

That’s pretty simplistic, but so is politics.  Harper’s wiggly line is good, Mulcair’s is bad, and Trudeau’s is so-so.  Ipso facto, the campaign matters.

That’s a cliché, but it’s also true.  That’s why Liberals – increasingly nervous about assorted things – have lately taken to repeating the mantra that the campaign matters, and the pre-season doesn’t.  (Maybe.)

To illustrate their point, they cite 1993.  Kim Campbell was the most popular Prime Minister in the history of polling, and Jean Chretien was being measured for a political pine box.  The campaign came, and everything changed.  (True.)

There’s a debate raging about this over on my Facebook page this morning.  In response to one commenter making the 1993-2015 comparison, an edited response from another commenter:

And that last one is the big one, as we attempt to divine the meaning of Grenier’s squiggles on a computer screen: if you were writing a book, a la Kerouac, and you were looking for someone to play Jean Chretien (Kerouac and Chretien were distantly related, by the way), who would you pick?