Here, amusingly (amusing because I have to use Google to find an example from one of my own books), is the etymology of the What Would Chretien Do? thing: 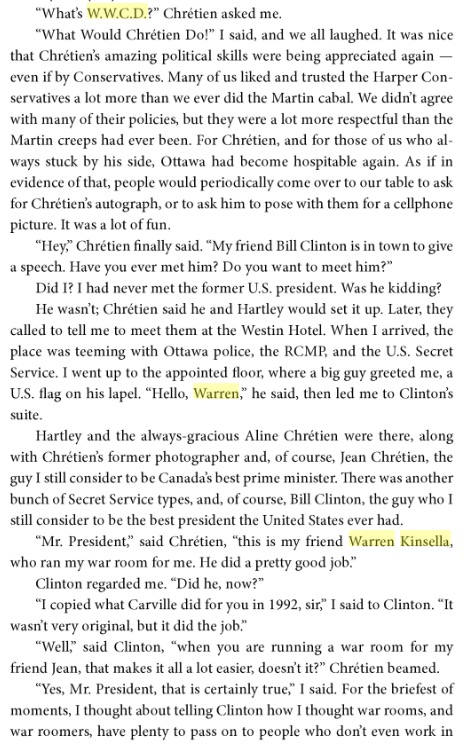 Others have written about the high regard in which the Harper Conservatives hold my former boss, here and here and here. But, as with most things in Ottawa, folks assume that what was once true is no longer true – i.e.., Harper couldn’t possibly be running the 2015 campaign like he ran the 2006 and 2008 campaigns, could he?

Of course he could. And he will.  These guys don’t abandon winning strategies very easily.

Thus, Michael Den Tandt writes this, in this morning’s papers:

“But to return to the crux, which from a Tory standpoint is the PM himself: The perception among Conservatives I hear from is that his brand is more broadly appealing than coverage from the Ottawa bubble would indicate, for the simple reason that he scores solidly, in his own way, on both the key image-based markers referred to above.

On TV Harper typically looks and sounds measured, solid, as he did Thursday in Toronto, with enough white in his hair to denote experience; and everyone knows he has the wherewithal to run a Group of Seven country because he’s been doing it for nearly a decade. Conservatives will also point to the fact that, despite the controversies stemming from the PM’s take-no-prisoners partisanship, despite the unfolding mess in the Senate, he has managed 10 years in power without being tainted with a perception of either personal dishonesty, or stupidity.

All of which may explain why, even now, 10 years in, with the Orange Wave supposedly poised to crest and the Liberals storming the Bastille to restore democracy, Harper is projected, based on current polls, to win this fall, albeit with a minority. He long ago tore a leaf from Jean Chrétien’s book — stability, no surprises, keep out of people’s faces — and made it his own. It still works.”

Indeed it does, indeed it does. There’s a reason why Harper wins all the time, and why – in my view – he is going to win again in the Fall. It’s because he a student of Chretien, as Den Tandt writes. I know, for a fact, that Harper and his inner circle have studied Chretien’s moves in the way that Raptor DeMar Derozan studies game tapes, over and over. The Harper guys tell me, still, how much they admire Jean Chretien. They’re not telling me that because they want to suck up to me – I have nothing to give them that they don’t already have.

There’s another Canada, you see, one that is South of the Queensway and North of Steeles. This is the Canada – a significantly larger and more powerful Canada – in which Stephen Harper (like Jean Chretien before him) remains the favourite. Yes, yes, I know: this renders apoplectic the progressive folks who live in the Annex or the Glebe, who have once again convinced themselves that Stephen Harper is a goner, and that the citizens of Carp or Stittsville or Malton or Stouffville are mouth-breathing, knuckle-dragging hicks. I know.

Well, the only connection those latte-sipping, Volvo-driving, C-51-hating One World Government types have to those aforementioned rural and suburban communities is that “they drive through them on the way to the cottage every weekend,” as my pal Darrel Bricker memorably put it recently. They don’t get all of Canada, in other words. They only know the Canada in which they live and work. It’s a smaller Canada.

Chretien and Harper understand the other Canada, because they come from it, and because they never forgot it. In 2005, accordingly, I wrote that the ballot question would be Starbucks versus Tim Horton’s. Amazingly, a decade later, it still is. Chretien and Harper represent the latter constituency – and Messrs. Martin, Dion, Ignatieff and now Trudeau represent the first one.

What Would Chretien Do? Well, for starters, he wouldn’t play footsie with nationalism, as someone else – appallingly – did just yesterday (i.e., refusing to “impose” policies on the provinces, sounding like a pequiste as he decries “centralization” in the most decentralized federation in the world). He wouldn’t flip then flop on an issue that has become a symbol of something much, much larger (i.e., promising to vote for a law before he had read it, and then saying he’d repeal it after reading it). He wouldn’t needlessly require his caucus to vote a certain way – when the issue in question had long ago been settled before our highest court (i.e., abortion, like gay marriage, are properly the law of the land, whether SoCon Grit or Tory backbench troglodytes like it or not).

And so on, and so on. You get the picture.

You tell me who is going to end up top of the class, when October rolls around.