As some of you will recall, Andre Marin and his crew in the Office of the Ontario Ombudsman – which still blocks me, an Ontario taxpayer, from access – made a complaint about me late last year to the Law Society of Upper Canada.

I didn’t ever write about the antics of Marin and his devotees – here and here and here – as a lawyer or a legal expert. I was writing as a citizen. The Marin crew know that, of course. But their objective is to shut me up – using taxpayer-funded resources, too.

Marin et al. were given months to assemble their complaint; I was given just days to respond. Despite that, I put together a 40-page response to their complaint over the holidays. In it, I’ve requested a full public hearing, to which the media and the public would be invited. Several free speech organizations have expressed interest in attending, as well.

This fight is going to be long and expensive. If you can help out in any way, please use the donate button to the left.

In the meantime, below is one of the things I had to say to the Law Society. I’d be interested in your thoughts. (But keep it civil – remember, Andre Marin and his crew are watching.)

Quote from letter to LSUC: “I sometimes receive criticisms about things I have written, or which others have written, on my web site. I review each complaint carefully, and take action. In this case, I never received a complaint – not one – from Mr. Marin or any other person about my web site. Instead, I only received a copy of Mr. Marin’s May 8, 2015 email to all of his staff from an anonymous member of that same staff. In it, he dismisses me and he goes on to actually encourage the staff at the Office of the Ombudsman to “feel free” to use a search engine to read all of the comments I and others had made. I fail to understand how the Office of the Ombudsman can now claim I have hurt the legal profession and the administration of justice when Mr. Marin himself was actively encouraging all of his staff to “feel free” to read what I and others had written. Either they objected to my web site, or they did not. But they cannot encourage their staff to “feel free” to read it on May 8 and then – just three days later – make a complaint about it to the Law Society of Upper Canada. That makes no sense.” 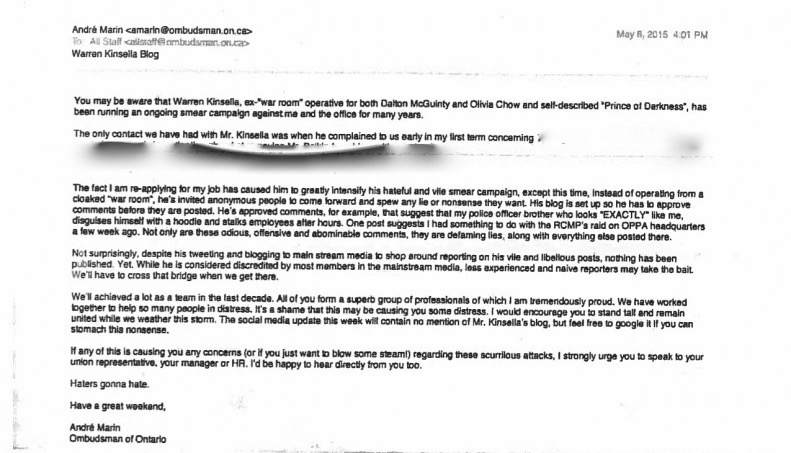