From the bulging “junenile insults” file: Kid Kodak lashes out

My sense he is unhappy about not being reappointed. Um. Er.

Here’s his (typically) tweeted response to Your Humble Narrator’s post of yesterday, which he posted at three o’clock in the morning. I’ve done a screen shot of it in case he decides to disappear it into the Internet ether: 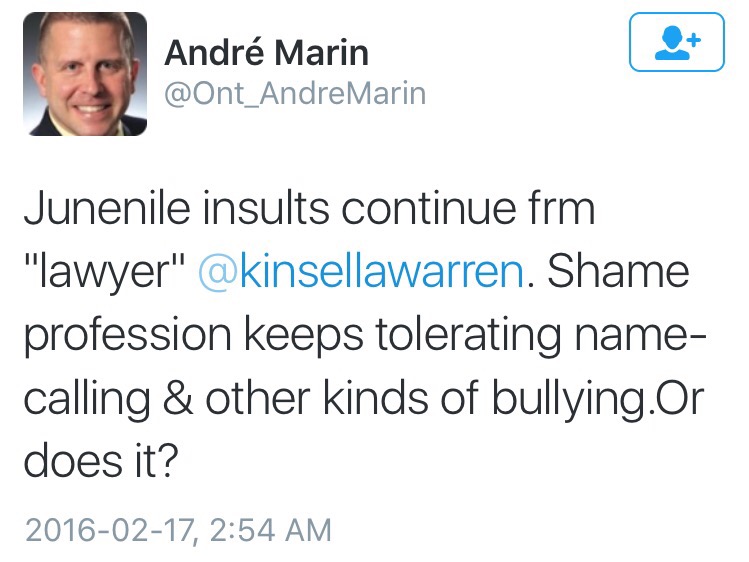 What’s he referring to, there? Well, he and his cabal made a complaint to the Law Society of Upper Canada, no less, to have me disbarred for being critical of him. I’m not making this up.

As I this morning told a fine National Post reporter (who has also been attacked by Marin), if the Law Society accepts this bogus complaint, they will be setting a very dangerous precedent – for themselves. They’ll thereafter get an avalanche of complaints about lawyers getting mad at refs at hockey games, lawyers having marital problems, lawyers’ personal Facebook posts, lawyers getting tipsy at Christmas parties. If you accept one complaint about non-lawyering activity, you have to accept all of them. It will be a disaster.

I was critical of Marin because I think he is a vain, thin-skinned bully. Because I think he didn’t act like a representative of the Legislature, he acted like a six-year-old with a bad temper. Because the senior people around him facilitated all that.

I was critical because Marin and his senior team have been the subject of several human rights complaints, all settled with secrecy agreements. Because he used public money to buy himself wide-screen TVs for his home and body wash and whatnot. Because he has given contracts worth a quarter million dollars to a friend. And because he – a quasi-judicial officer of the Legislature, with more power than any judge or MPP – repeatedly acted like a child on social media.

Every newspaper in Ontario, pretty much, has editorialized against him at one time or another, and for good reason. Good riddance, we say. And good luck with your attempt to silence your critics, pal – same sort of thing isn’t working so well in Alberta for Rachel Notley, is it?

(Oh, and if you want to contribute to my legal defence fund, feel free to use the “donate” button to the left!)