The New York Times and the times in Fort Mac 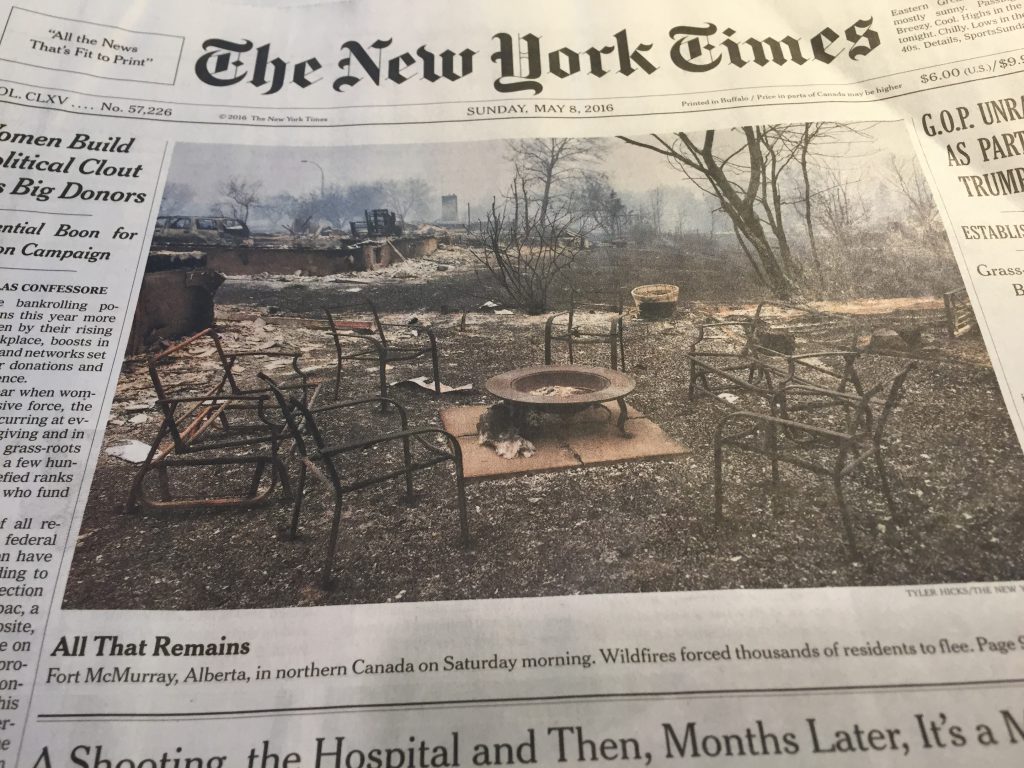 I am a devoted reader of the New York Times.  It was via the Times, in fact, that I first learned of the Carville-Clinton war room in 1992, contacted them, and basically copied their concept in Canada.  It is the best English-language newspaper in the world, and it is the only newspaper we subscribe to anymore.

Their coverage of The Beast – the fire that has ravaged Fort McMurray and beyond – has surprised me, a bit.  On the one hand, they have accorded it prominent, daily coverage, as seen above.  Good.

On the other hand, however, they (like Slate) have published some extraordinarily ignorant things about what they themselves, just this morning, rightly called the most expensive natural disaster in Canadian history. Like this.  People were lured there by “a fat paycheque?” Really, guys? The ones now sleeping on the floor of an arena, and who only escaped with the clothes on their backs? Pretty classless, Times folks.  Not good.

Anyway. I’m like most Canadians, in recent days: Fort McMurray has left me acutely aware, and wondering, what people outside of Canada think about it all, and if they in fact care.  (It also perhaps explains why I, and many others, want to see the NBA and Dwyane Wade censured for the disrespect they’ve shown towards Canada.  We’re a bit touchy, these days.)

So, while we are appreciative that the Times is giving the story the attention it deserves – and while it is amazing that the likes of CNN are assisting in the rebuild, as seen here – a bit more sensitivity towards the nearly 90,000 victims of the fire would also be welcome, please and thanks.

(That’s the subject of this week’s Hill Times column, too, which I will post here tomorrow.)