Oil and hydro: the bane of Trudeau’s existence

Oil is way down in Alberta, hydro is way up in Ontario. Justin Trudeau isn’t responsible for either, but he’s apparently being blamed for both.

From our buddies at Abacus: 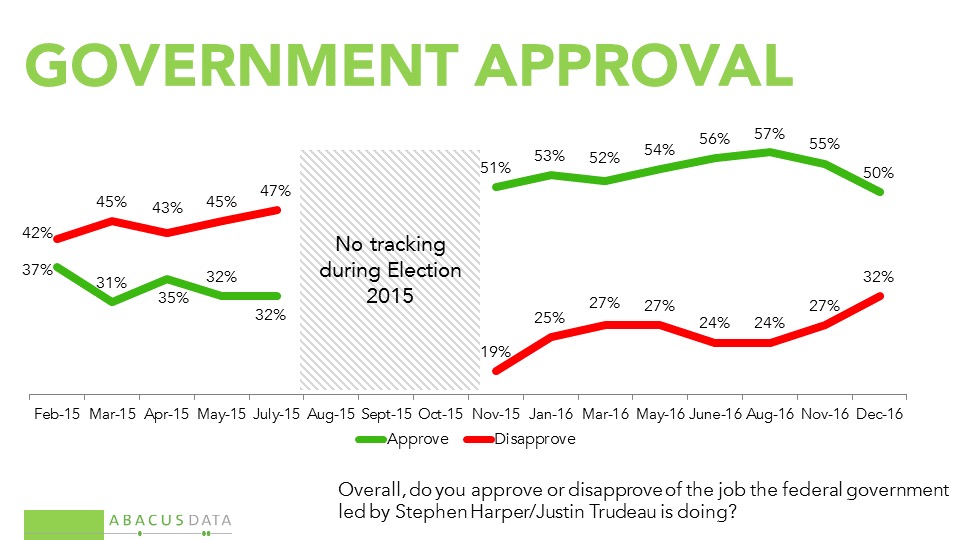 And, in their words:

As 2016 winds down, approval of the performance of the Trudeau government sagged a bit to 50%, in line with the numbers achieved at this point last year, but down from the levels seen earlier in the year. 32% disapprove of how the government is doing.

The sliding approval rating is largely attributable to opinion shifts in Ontario and Alberta, and among Conservative voters. Liberal and NDP voters remain about as satisfied as they have been with the performance of Mr. Trudeau’s government. Quebec and BC show considerably less fluctuation.

Trudeau’s guys must be a bit frustrated by all this, because they don’t control how expensive hydro is or how inexpensive oil is. But he’s taking a hit for both, just the same.

He needs oil to go up, which I think it will do in Q2 2017. He needs hydro rates in Ontario to go down, or some dramatic political changes, in Q1 2017. I think the latter is more likely than the former.

We shall see. In the meantime, I – for one – feel for Justin Trudeau. He’s being blamed for crap that is in no way his fault.

Politics is a cruel mistress, etc.