A friend from my Calgary law school now lives in New York City with her family. She posted the words below last night.

Facebook leaves a little white rectangle to respond to what people put up, but I found myself lacking any useful words. Since November, this sort of thing has been happening over and over, and all over. But I truly didn’t know what to say to my law school colleague. This was someone I knew, and that changed my perspective. (As did this, a few weeks earlier.)

Since November – when Hillary Clinton got three million more votes than Donald Trump, but lost – my world view has dramatically, dramatically changed. I no longer subscribe to that old political cliché, that “the people are always right.” They clearly aren’t. With Brexit in the Summer, and Trump in the Fall, the people are wrong, now, all the time.

I no longer believe in the inherent goodness, and common sense, of everyday people. I now believe a surprising number of them are racist idiots. They’re fools.

I no longer believe that democracy is the least-imperfect of the various imperfect systems out there. It is more than imperfect: it is a fetid, stinking mess. It needs fixing, but I don’t know how, or with what.

I no longer believe that war is improbable, for those of us in the Americas and Europe. With Trump, I now believe war is almost inevitable. He’s already fomenting conflict with China, and he isn’t even president, for the love of God. When he is president, things will get far, far worse. Count on it.

Anyway. In the little white Facebook rectangle, I thumbed out a few words to my friend, but they seemed (and seem) wholly inadequate. More needs to be said and done. But what?

So, I am doing one of the few things I know how to do: I am writing a book about the new world disorder. Two publishers are looking at my proposal. A prominent filmmaker is considering a documentary. I will let you know how it works out.

In the meantime, all of us need to be pushing back against what my law school friend experienced. We need to fight it. To remain silent, as they say, is to be complicit. 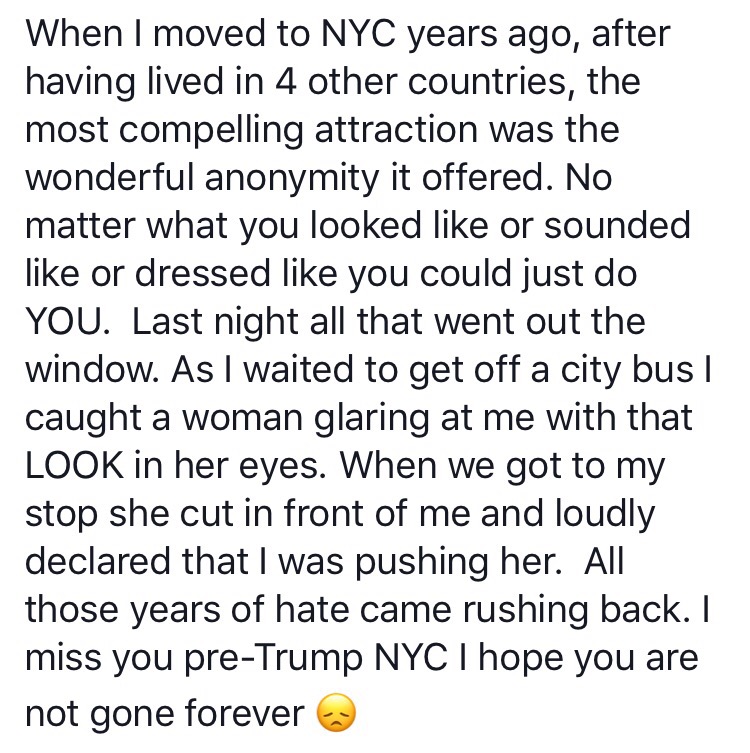