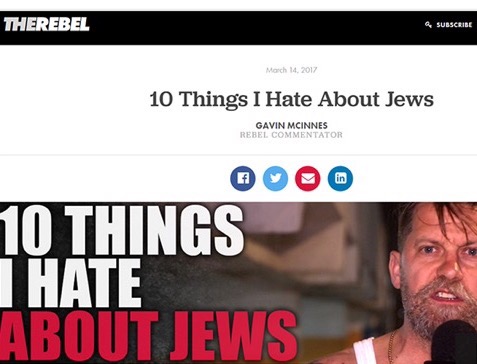 Here’s some other things he said:

I don’t think there can be any doubt those statements are unambiguously anti-Semitic, but in case you have any doubt, they were enthusiastically promoted – and celebrated – by former Ku Klux Klan leader David Duke, and America’s current neo-Nazi leader, Richard Spencer:

Around the same time McInnes made his statements, another Rebel Media person, Lauren Southern, abruptly left the organization.  Southern also counts Spencer and assorted neo-Nazis and white supremacists among her fan base.  There is a lot of speculation online that she is more aligned with the National Policy Institute’s Richard Spencer than with Rebel Media’s  Ezra Levant.  Personally, I don’t know if that’s true: I have never watched any of her many (many) videos.

Now, am I fan of the Rebel web site? Full disclosure: not really.  That’s particularly the case after Rebel’s Faith Goldy defended a far-Right pedophile in a bizarre effort to slime me for, um, being critical of pedophiles.

Anyway.  Ezra and I have a long, long history.  We’ve slammed each other, we’ve sued each other, we’ve gone after each other.  When Sun News Network started up, Kory Teneycke asked us to enter into an armistice, and so we did.  It’s held ever since, and I’ve been content to let other people fight with Ezra.  Been there, done that.

And I will give Ezra credit for this much: one, he built the Rebel thing from the ground up, and he has turned it into a significant player in the Canadian media universe.  It’s not a news service, not by a long shot – it’s simply a web platform for Right-wing and far-Right-wing opinion – but it’s not inconsequential.

So what, then, is he doing keeping the likes of Gavin McInnes on the payroll?  What is the truth about alt-Right heroine Lauren Southern and her speedy departure?  Is Rebel Media so free-speechy that it will now give an uncritical platform to Holocaust denier rhetoric?

Some say all this means the end of Rebel Media.  Personally, I doubt it.  They seriously underestimate Ezra Levant.

But it’s all deeply unsettling, and pretty off-brand, too.  When Ezra Levant is prepared to play host to the likes of Gavin McInnes, spouting anti-Semitic filth, well…it’s not good.