Berkeley: I can’t stop laughing at this picture

There were some confrontations between Left and Right – or, more accurately, antifa and white supremacists – at Berkeley in the past few days. As my Canadian friend (and Berkeley resident) Mike Brock wryly observed: “must be Saturday.”

Anyway, the Berkeley street fights attracted cameras, which meant that those who love to see themselves on camera were attracted to Berkeley, too. Including some Canadians.

Here’s one on the, um, right. It’s our very own Ilsa, She-Wolf of the Clueless, Lauren Southern.

I have laughed at this photo every time I have looked at it. Perhaps you will laugh, too. 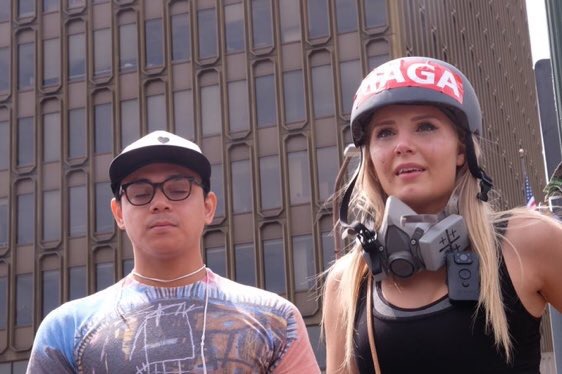 Who is the nerdling beside Ilsa? Why, that’s apparently one of the Proud Boys. What’s a Proud Boy, you ask?

Well, they’re sort of a white supremacist frat boy thing. They get drunk and beat up on minorities. They are the brainchild – as it were – of Gavin MacInnes, the anti-Semitic guy on Rebel Media.  He’s a tit.

Anyway, Gavin’s Proud Boys can be read all about here. But this is my favourite part:

There are times when I am uncharacteriatically at a loss for words. This is one of those times.