Unpresident, we’re coming for you 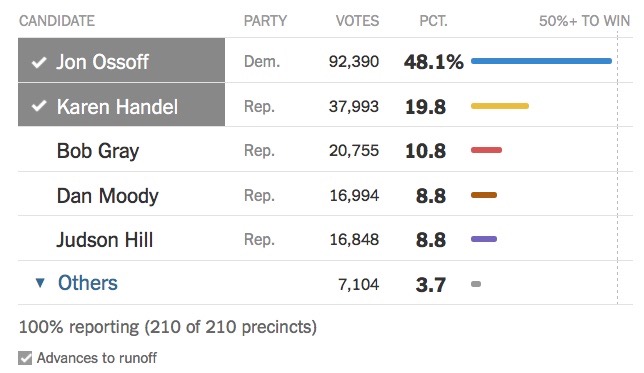 This special election was for a vacated seat in Georgia’s Sixth Congressional District.  It was a solid, long-time Republican fortress, formerly held by Tom Rice and Newt Gingrich.  It hasn’t sent a Democrat to the House of Representatives since the Carter administration, forty years ago.

Had 30-year-old newcomer Jon Ossoff won just a few more votes, he would have been elected outright last night.  He now faces a run-off against his nearest GOP challenger – a Trump supporter who got 55,000 fewer votes.

Donald Trump, that combed-over, sphincter-mouthed, sausage-fingered groper-in-chief, is an albatross around the jowly necks of every Republican, now.  And he is hurting conservative causes everywhere, even in far-away Europe (see here and here).

The mid-terms, if Agent Orange makes it that far, will be a historic disaster for the Republicans.  And Donald Trump will be the reason.