Remember this? I was a kid, but I sure do: 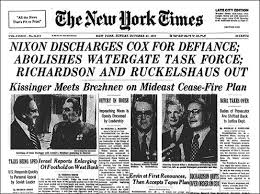 That was October 20, 1973. By November 17, Nixon was declaring that he was “not a crook,” when he was. By July 24, 1974, the U.S. Supreme Court unanimously ruled that Nixon must turn over all of the While House tapes. Three days later, the House Judiciary Committee passed the first of three articles of impeachment. Nixon resigned on August 8, 1974.

So, 292 days after Nixon fired the special prosecutor – as Trump is now clearly readying to to do with special counsel Mueller – he was gone.

I don’t think Trump will make that 292 day mark. But I really, really hope he fires Mueller. It will be the final admission of guilt, and set off a massive constitutional crisis, and paralyze his ability to do anything.

Do it, Unpresident. We dare you. The historical precedent is not in your favour.