Recipe For Hate is being featured on Apple’s iBooks!

Check it out: Apple is promoting Recipe For Hate on their iBooks web site!

My ever-patient Dundurn Press publicist, Kendra, says that Apple has decided to promote pre-orders of the book on their Sneak Peaks pages.  A short download of the book is there, too, to encourage folks to check it out.

Is this a big deal? I’m told it is: “iBooks is available in 51 countries. It ranks second in the U.S. for reading devices/reading apps, after Kindle…that’s still a lot of readers you’re missing if you are not publishing on iBooks. In Canada, iBooks is also ranked second, but not to Amazon; Kobo is the number one reading app/device in Canada. In the UK Amazon’s Kindle and iBooks are neck and neck. In Australia, iBooks is the number one reading device. Canada, the UK, and Australia are three English-speaking countries where you are losing sales if you are not publishing on iBooks.”

Among other things, it reminds me (again) that the book business has certainly changed in the 25 years since Unholy Alliances was published: back then, publishers still did big book tours and there were actual book sections in newspapers.  Now, however, book tours have become pretty rare, and book sections have effectively disappeared, too.

In the coming weeks, however, we are going to have an old-fashioned book launch for Recipe For Hate in Toronto, to which you are all invited (see below), there will be book tour-type visits to Ottawa and the West and around T.O. and in the U.S., and there will be lots of events (and if you want me for a speaking event, email me at wkinsella@gmail.com). 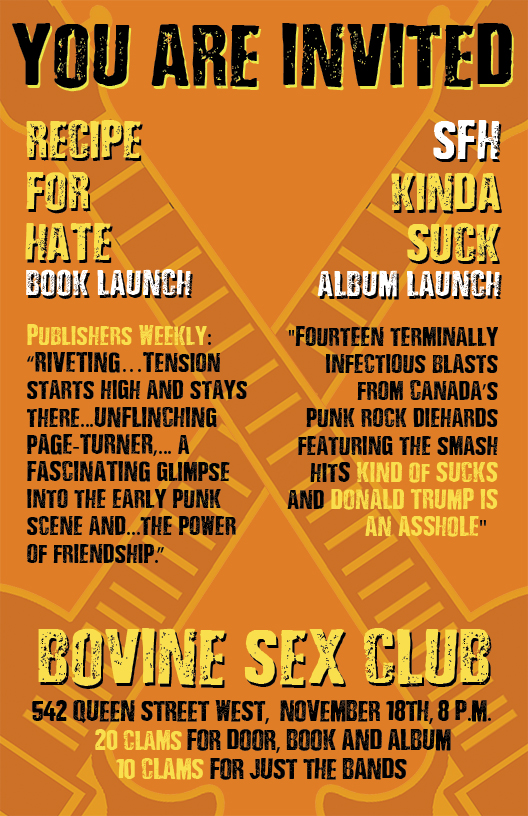