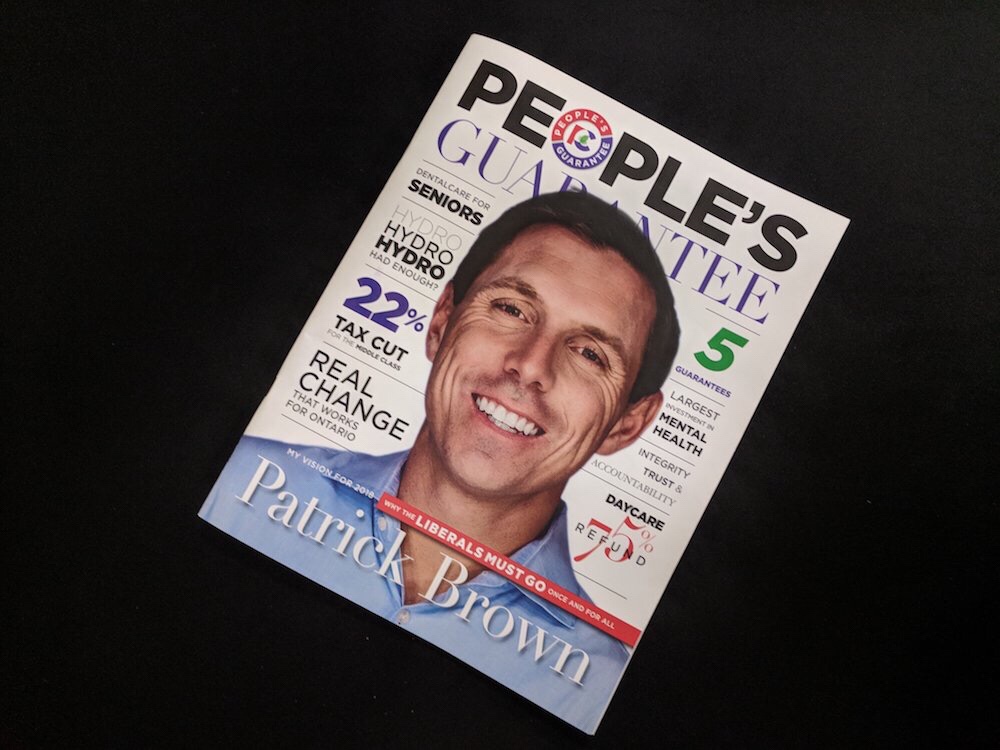 Can a single page win an entire election?

If it can – and it might – PC leader Patrick Brown may well have won the 2018 provincial election this weekend.

One sheet of paper: seriously. Here it is.

It’s the cover of Patrick Brown’s PC party (because they truly are his party, now) platform, the People’s Guarantee. It is actually brilliant. Let me explain.

I helped out a bit on the development and rollout of the Liberal Party of Canada’s now-legendary 1993 election platform, which came to be known as the Red Book. But, as the guy running the ’93 war room, my task was mainly to defend the Red Book.

The reasons why the Red Book was successful, and why it needed to be defended, are myriad. But Brown’s little book (with the cheeky socialist-y name) shares certain characteristics with the Red Book. There are five.

Oh, and one more thing, which was actually found on another sheet of paper: the PCs had a former federal parliamentary budgetary officer check out their numbers and declare them sound. I laughed when I saw that.

A few months ago, you see, I ran into Brown’s diminutive genius Chief of Staff, Alykhan Velshi, and told him the smartest thing we did in 1993 was get our Red Book numbers validated by a major Canadian accounting firm. We stuck their “sound accounting principles” letter right at the front of the Red Book. That way, when our numbers were attacked by the governing Conservatives and the NDP, we’d have an effective response. It worked, too.

So there you go: two pieces of paper, not one. But impressive, just the same. Will those two sheets of paper help the PCs finally win?

Lots of stuff helps you win an election campaign: good advertising, a well-organized tour, a commanding debate performance, impressive candidates, a war room that leaves no charge unanswered. All of those things matter.

But this weekend, I think Patrick Brown’s PCs made themselves the party to beat. I don’t ever count out Kathleen Wynne, but – as of now – nobody should be counting out Patrick Brown, either.