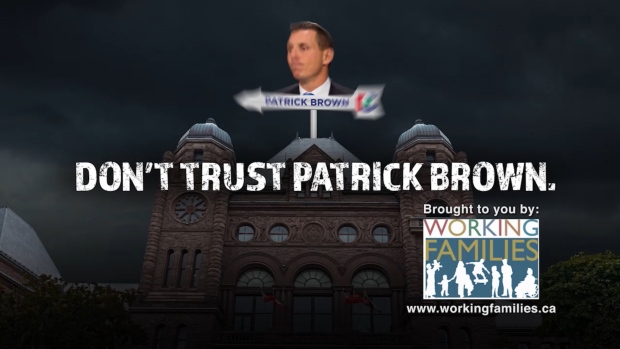 The Working Families group has a new ad out.  If you live in Ontario, you’ve likely seen it.  If you don’t, you haven’t.  But the ad is worth talking about, because of the issues it raises.

Working Families describes itself as a group that was “created by members of the labour movement with the goal of making voters aware of policies that were threatening the well-being of working families across Ontario.”  It doesn’t like conservatives very much.

Working Families has been around for a while.  Before and during Ontario elections, it ran lots of ads going after the Progressive Conservatives.  Even though I was the guy who ran Dalton McGuinty’s war rooms in 2003, 2007 and 2011, I can tell you that I was never a big fan.

The media assumed, wrongly, that we Ontario Liberals were secretly working with Working Families.  I’d never met the shadowy figures behind Working Families, however. I couldn’t pick them out of a police line-up – which is where most PCs thought they belonged.

Their ads, I thought, were ham-fisted and off-message.  As the Ontario Liberal war room guy, I didn’t need the media always suggesting that we were covertly conspiring with some US-style dirty tricks operation to get around Ontario election law.  But that’s what Working Families ad campaigns did, more than anything else: they made our job harder.

For Ontario Liberals, Working Families new ad campaign is going to create even more trouble.  Among other things, it’s dumb.

It’s only 30 second long, but it packs a lot of bullshit into that half-minute.

Now, it says, correctly, that Donald Trump’s election has caused “suffering.” It says, accurately, that Brexit is causing “chaos.”

Forget about the fact that Brown has lately marched in innumerable pride parades, now loudly favours gay marriage, and wants to see the minimum wage increased, too.  Forget about all that.

The main allegation in the Working Families ad is that Patrick Brown is basically the Great White North version of Donald Trump, the Mango Mussolini.

I’m a big fan of tough campaign ads.  I’ve put together quite a few of them over the years.  I’ve written books about them. When polled, people will always say they don’t like “negative political ads.”

But that, to me, is letting language do our thinking for us.  If you ask any sentient being if something “negative” is “positive,” they’ll obviously say no.  Nobody likes car crashes, either, I like to say.  But they always slow down to take a look, don’t they?

The Working Families ad is bullshit.  The notion that Patrick Brown – who has voted with the Liberals on every single tolerance/diversity issue in the Legislature – is Donald Trump is, well, crazy.  And anyone making that claim, with a straight face, is either fibbing or stupid.  Or both.

Go neg, for sure.  It isn’t ever wrong to criticize the public record of an opponent seeking high public office.

But don’t lie about it. Because those rotten eggs you want to throw at your opponent?

They’re going to bounce off him, and hit you.