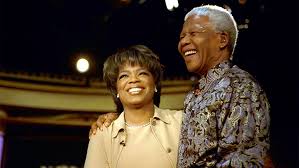 Ten reasons why Oprah would be a great candidate

Besides the weather, it’s all anyone is talking about: her speech at that awards thing was a blockbuster.

2.  She would be a candidate at the precise moment when women are dominating the public and political agenda, and are looking for a candidate who will speak for them.

3.  She uses her celebrity in positive ways – to oppose bullying thugs (cf. Trump) and to promote great leaders (cf. Obama, the anti-Trump).

4.  The most motivated Democratic constituency – as we saw in Alabama – is African-American women.  An Oprah candidacy would keep them motivated and involved.

5.  She actually has a legislative record – cf. The Protect Our Children Act, an anti-predatory bill that became known as the Oprah Act.  She gets stuff done, even as a private citizen.

6.  She’s likeable and relatable, to say the least.  She didn’t get millions upon millions of viewers, and build a communications empire, by being a repellant reality TV circus act – she did it by being a person average folks want to bring into their living rooms, every single day.  As they did.

7. Does she have many years of political involvement?  No, she doesn’t, and so what.  In an era when many voters, on all points on the ideological spectrum (see: Trump and Sanders) are looking for atypical/outsider candidates, Oprah’s distance from Capitol Hill is a help, not a hindrance.

8.  She may be a billionaire, but she comes from humble roots – the child of an unwed mother in Mississippi, a survivor of sexual abuse, she was an honours student who could recite Bible verses off the top of her head.  She pulled herself up by her bootstraps.  And, she’s Oprah, for Chrissakes.

9.  She is unique, in that she is one of the few Weinstein-era celebrities who has retained her moral authority.  At a time when America is turning its lonely/anxious eyes to a Joe DiMaggio, Oprah is Joe DiMaggio.  She’s Poprah.

So, to those nay-sayers, objecting to my ten points here or on Facebook or Twitter, I say this:

If not Oprah, then who?  Who is the Democratic alternative?