These results are consistent with what John Wright’s DART came up with yesterday, as seen here. 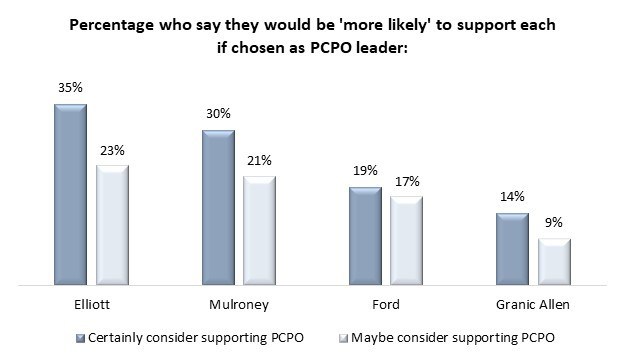 The chaos and scandal that have rocked the Progressive Conservative Party of Ontario over the last six weeks appears to have done little damage to the party’s electoral fortunes, but a new public opinion poll from the Angus Reid Institute shows that could change, depending on the outcome of this weekend’s PC leadership vote.

Two of the people running to replace former leader Patrick Brown – Christine Elliott and Caroline Mulroney – seem well-positioned to maintain the party’s lead before the scheduled June election, but a third – Doug Ford – could send would-be Tory voters running for another party, or keep them on their couches come election day.

This dynamic could extend to vote intention as well. Both Elliott and Mulroney would inspire more Ontarians to vote for the party than they would drive away, while Ford would discourage double the number he would encourage to support the Progressive Conservatives if he became leader (42% versus 19%, respectively).

The Wynne Liberals have two shots at survival: the big-spending budget that is coming at month’s end, or the campaign that comes very quickly after that.

Chad Walsh, Rebecca Mackenzie, Alexis Levine and a few other Ontario Liberals have the skills to craft a winning campaign.  The Wizard and the Board, meanwhile, are the same group who destroyed the federal Liberal Party and consigned us to a decade in the wilderness.  And they still have Wynne’s ear.

The budget, meanwhile, needs to be simply extraordinary.  Pharmacare, Hydro price rollbacks, the minimum wage hike, etc. have all been popular – but Wynne hasn’t become more popular as a result.  So what can she do in that budget that will make enough of a difference?  It is going to be her campaign document – but I’m not sure enough voters are listening to her anymore.