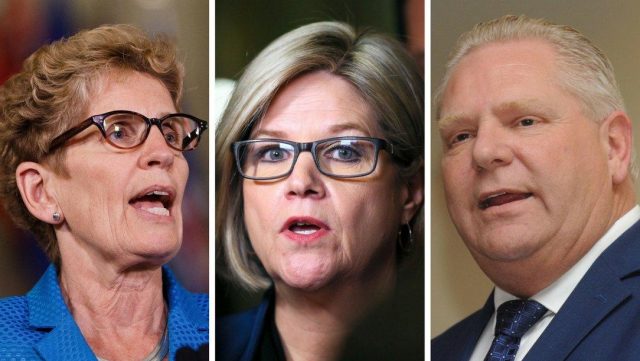 Column: will Wynne’s story have a sad ending?

There are all kinds of clichés about how and why governments lose.

Mostly, though, governments forget the plot. All of governing – all of the politics – is telling a story, every single day.

Some folks call that a “narrative,” and assert that you need a narrative to win. And, it’s true: having a compelling, easily-understood story is pretty important.

People are busy. They’ve got a lot of stuff going on. ‎Taking a kid to early-morning hockey practice, getting an aging parent to the clinic, trying to get to work on time, catching up on sleep.

So, political parties need to get their attention. You don’t do that by throwing statistics at voters. You do that by having a narrative, a story. Facts tell, stories sell.

Barack Obama had one: “Yes we can.” Dalton McGuinty in 2003, too: “Choose change.” Justin Trudeau: “Hope and hard work.” Those were good ones. They worked, big time.

Kathleen Wynne, now less than 60 days from an election many expect ‎her to lose, has no story to tell. There’s no narrative, there. No bright red thread that runs through the stuff that she says and does.

She has briefly prorogued ‎the Legislature so that she can have a Throne Speech, sure. But Joe and Jane Frontporch don’t care about Throne Speeches. They don’t pay attention to those. The media and political people do, but that’s it.  Normal people don’t.

So, the last opportunity‎ Wynne has to tell her story – any story – is in the budget that is being unveiled at the end of this month. We don’t know much about what’s in it, but we do know one thing: Charles Sousa lost the argument.

Wynne’s Finance Minister was rightly proud of having balanced the budget last year. It was a big deal. But then he was told – instructed, really – to go back into deficit. So he will: $8 billion worth of red ink. That’s a lot.

When I heard that, I was shocked, and I don’t get shocked by politicians very much any more. That figure strongly suggests we are about to witness the most expensive Hail Mary pass in Canadian political history.

I don’t think it’s going to work. Not because Kathleen Wynne isn’t an amazing communicator and a wily campaigner. Not because she doesn’t know how to beat Conservatives. She does, she does.

Remember that? It possessed all the dignity of that helicopter lifting off that rooftop just prior to the fall of Saigon. It felt as desperate as a death row at midnight in the deepest South.

Martin promised to amend the Constitution in the middle of a leader’s debate: he actually did that. He proclaimed a stirring new vision for indigenous people without allocating a plug nickel to pay for any of it.

He promised tax cuts, lots of them. He started spending money, lots of it. “Mr. Martin, known for his careful stewardship of Canada’s public finances under Mr. Chretien,” The Economist wrote disapprovingly at the time, “has gone on a bit of a spending spree in the run-up to what he knew would be an early election.

The magazine continued: “The government promised $39 billion in new tax cuts and spending over the next five years. Mr. Harper accused of Mr. Martin ‎of promising over a billion dollars a day in order to hold onto power.”

In yesterday walks tomorrow, goes the saying. Down here in Toronto in 2018, it’s feeling like Ottawa in 2005 all over again. You know: spend like a proverbial drunken sailor, throw every single policy Vietnam at the wall, just to see if something sticks.

So why is Kathleen Wynne making a losing narrative her only narrative? Good question. Lots of Liberals are asking the same question. “She’s smart,” they say. “Why the desperation?”

The answer may be found not in Wynne. More likely, Ontario Liberals say, the authors of the Hail Mary Pass Budget are found with those around Wynne, and not Wynne herself.

And guess what? Surprise, surprise: the ones who Kathleen Wynne are relying upon for strategic advice are the very same men who advised Paul Martin in his bunker back in 2005, as the blue horde was closing in. Same guys.

Same strategy, too. It has three parts. One, bet the house on your opponent doing some career-ending stupidity. Two, promise everything to everyone. And, three, spend like money is water. ‎ Go crazy.

Now, full disclosure: this writer doesn’t much like those Paul Martin guys around Kathleen Wynne. They hounded my friend Jean Chretien for years, and – as a result – they wrecked the Liberal Party of Canada for a decade‎.

They look like they’re getting ready to do the same thing to the Ontario Liberal Party – a political party about which I’m rather nostalgic. I ran the aforementioned McGuinty guy’s three war rooms, and I want to keep the OLP off the endangered species list, you know?

But the polls. The polls – Doug Ford, um, notwithstanding – have been showing the Ontario Liberal Party facing a possible third-place finish. Even against Doug Ford.

They don’t have one. They just don’t. And they’re out of time.

That, pretty much, is why the Ontario Liberal government is likelier to lose than to win.

They don’t have a story to tell anymore.