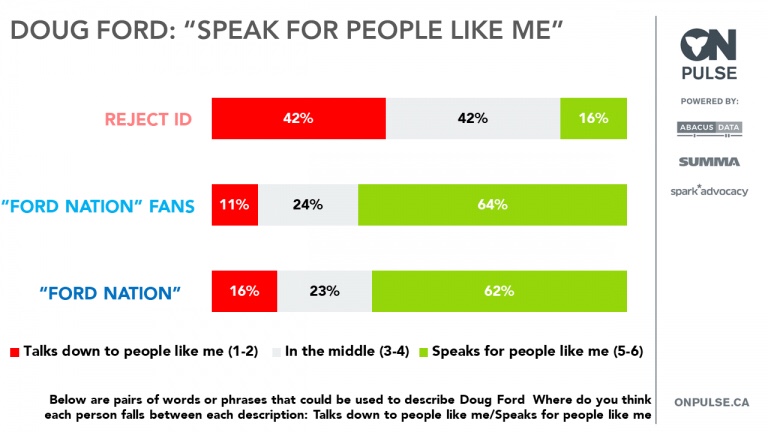 Doug Ford, and why the populi like his vox

Abacus (with whom Daisy proudly does work, full disclosure, etc.) has a fascinating poll out about who is in the so-called Ford Nation, what they think, why they think it, etc. etc. It’s here.

Now, in recent weeks/months, some folks have been asking me: “Warren, why don’t you hate Doug Ford as much as me and my friends in the Annex do?  Why do you say nice things about him?”

Well, two reasons.  One, I like him.  I’ve written about why, here.  When I was being used as a human piñata, Doug was the first guy to call me.  In politics, you tend to remember calls like that.

Two, the claim that Doug Ford is Donald Trump is fucking idiotic.  The Doug Ford I know is readily seen here – I encourage you to watch all of it – and he bears no resemblance, in any way, to the Mango Mussolini. (Some days, as I told Evan Solomon on his CFRA show yesterday, I’m not even sure Doug is an ideological conservative.)

Why is Doug winning?  Lots of reasons.  Weariness with the Ontario Liberals.  Suspicion about the Ontario New Democrats plans.  But, mainly, I think it’s because his opponents have greatly underestimated him.  I used to work for a guy, remember, who was underestimated all the time.

And Doug is sort of like that guy, that little guy from Shawinigan.  And, he’s like Ralph Klein, Mel Lastman, René Lévesque, Jean Chrétien. He’s like all of those populist-type politicians who are anti-politicians.  He doesn’t look a matinee idol, he doesn’t use perfect grammar, he sometimes (and often) says the wrong thing.

Don’t believe me?  Check out this Abacus slide.  It tells why he is ahead, and why he is likely to stay there. 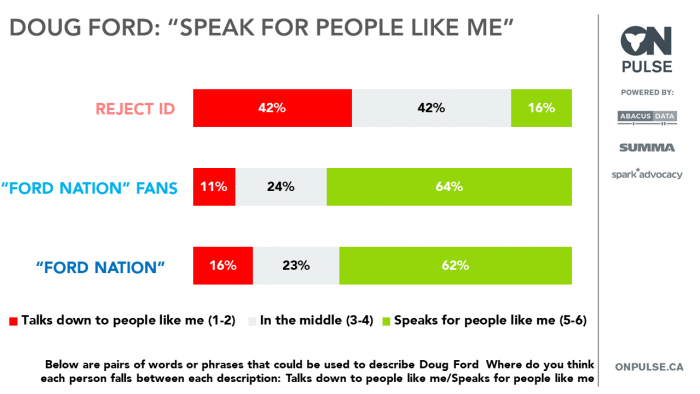