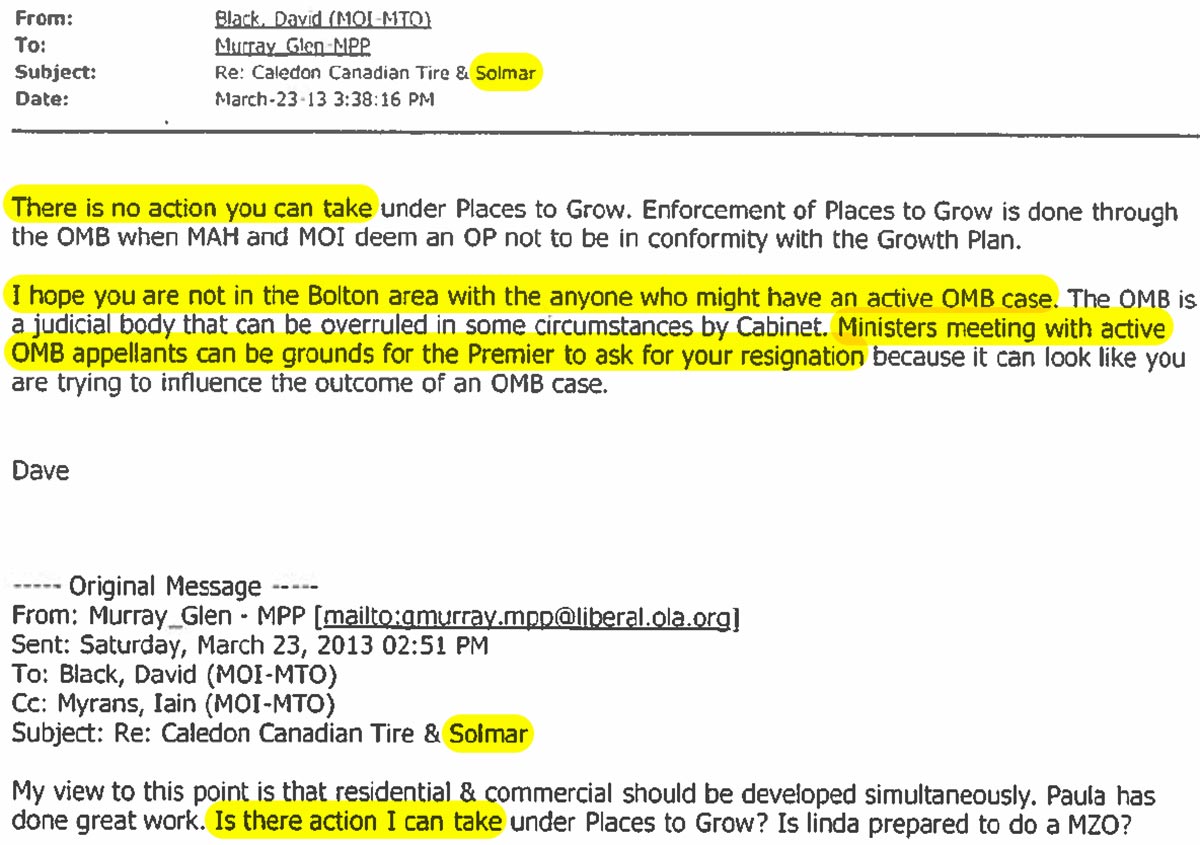 About that huge, huge Globe investigative story: read it 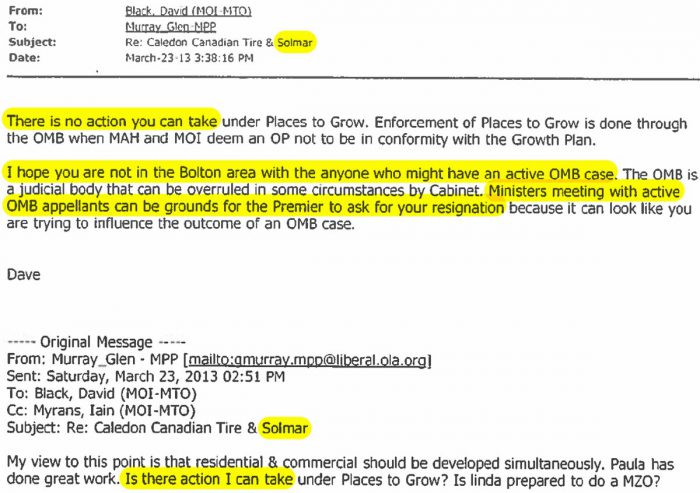 One, it’s behind a paywall because journalists deserve to get paid just like you are.  Do you give away your goods and services for free?  Neither should they.  Cough up a few bucks and subscribe, for Chrissakes.  Don’t be cheap.

Two, this story is going to have an impact on the Ontario election – in a way that is very unhelpful to prominent Ontario Liberals.

Three, I left Navigator when Glen Murray arrived there, unbidden by me.  I despise him. His life is about to get very complicated, and deservedly so.

On March 23, 2013 – a Saturday – Mr. Murray travelled to the farm fields south of Bolton that Solmar sought to build on.

In an interview with The Globe last year, Mr. Murray acknowledged that he did not travel alone, but he declined to identify whom he was with, other than to say it was a “planner” or “consultant” for Solmar…During his site visit, Mr. Murray e-mailed his chief of staff, David Black, and asked him what powers he had, as minister, with respect to the housing development.

Mr. Black responded with blunt advice: “There is no action you can take.”

Mr. Black (who is now chief of staff to Infrastructure Minister Bob Chiarelli) declined to respond to questions from The Globe. But his e-mails to Mr. Murray – obtained under the Freedom of Information Act – show he was concerned that his boss was with someone from Solmar.

And that was potentially a big problem. Solmar had taken Caledon to the Ontario Municipal Board, the quasi-judicial body that has the power to overturn the planning decisions of cities and towns, and a decision had yet to be rendered. But the OMB can be overruled by cabinet – which is why, Mr. Black warned his boss that day, ministers are forbidden from interacting with developers currently before the tribunal.

“I hope you are not in the Bolton area with anyone who might have an active OMB case,” Mr. Black e-mailed to Mr. Murray. “Ministers meeting with active OMB appellants can be grounds for the Premier to ask for your resignation because it can look like you are trying to influence the outcome of an OMB case.”

…But his interest in Bolton did not fade. On April 18, Mayor Morrison and two of her staff drove to Queen’s Park at the request of Mr. Murray.

According to Ms. Morrison and another staff member present that day, Mr. Murray scolded them for what he said was poor planning. He had a specific idea, too: The swath of land south of Bolton should be designated for homes .

Next, Minister Murray asked all of the aides, including his own, to leave the room. All of a sudden Ms. Morrison found herself in the type of meeting she had long refused to take – one without witnesses. And what unfolded next reminded her why.

“In my opinion, he threatened me,” said Ms. Morrison, who recounted the exchange, over several interviews with The Globe. “He told me that he had some complaints against me that were very serious and that he could make them go away if I changed those lands to residential.”

Ms. Morrison, then in her 10th year as mayor, insisted she had done nothing wrong, and that Mr. Murray could do whatever he liked with those “complaints.”

As he prepared to leave the room, she says, the minister repeated one more time that she “had better” permit homes on that land.

There is another person whom Ms. Morrison says she told about the encounter: Ontario Premier Kathleen Wynne.

In December of 2013, she heard Ms. Wynne on the radio claiming, in the wake of a massive ice storm, that she had spoken with all the mayors in the GTA. Ms. Morrison – who had lately become disenchanted with politics and had decided not to seek re-election the following year – became enraged: She had never heard from the Premier in the storm’s aftermath.

And so she sent the Premier a letter that made a pointed reference to a TV ad, filmed in Caledon, that showed Ms. Wynne out for a run. “Perhaps you have forgotten that Caledon is one of the GTA municipalities, not just a scenic location north of the city to film jogging commercials.”

Not long after, says Ms. Morrison, Ms. Wynne called her and said, “I got your letter … I don’t understand why you’re so upset.”

“I’ll tell you why,” the mayor replied, and chronicled Mr. Murray’s conduct. She says Ms. Wynne told her “I’ll be dealing with him.”

Ms. Morrison said that, at the time of that phone call, she didn’t realize that Solmar had donated $20,000 to Ms. Wynne’s 2012 leadership campaign – a sum that was among the largest contributions it received.

It was the last time she spoke with Ms. Wynne.