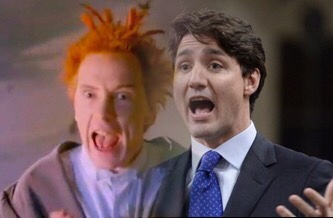 Column: anger is an energy

Anger is an energy.

That’s a line from Public Image’s improbable 1986 hit single, ‘Rise.’ The former Sex Pistol Johnny Rotten wails it, over and over, and it eventually makes a point worth pondering: that, sometimes, it’s advisable to get a bit angry.  It’s not always a good idea to turn the other cheek, and keep quiet.

Historians will one day go in search of Justin Trudeau’s righteous anger, and they’ll probably start with June 10, 2018.  It was on that day that Donald Trump called the Canadian Prime Minister “very dishonest” and “weak.”

Trudeau wasn’t dishonest, of course, and he wasn’t weak.  He was merely doing the job he was hired to do.  But Trump’s puerile insults revealed one truth.

And that truth was this: with the TPP torn up, the Paris Accord a memory, and NAFTA heading swiftly to the morgue, Justin Trudeau’s Trump charm offensive had become an abject failure.  All of it had come to naught:  the dozens of phone calls.  The bilateral meetings.  The cordial diplomacy. The gift exchanges.  The disconcerting bromance between Trudeau’s chief advisor, Gerald Butts, and Trump’s former chief advisor, Steve Bannon.  All of it.

On June 11, 2018, Trudeau’s efforts to nudge Donald Trump towards re-ratifying NAFTA – with flattery, with blarney, with even some servility – came crashing to Earth.  And, at that point, every Canadian – from Doug Ford to Jason Kenney to even Stephen Harper, appearing on FOX – got mad.  And they wanted to see their Prime Minister get a bit mad, too.

But Trudeau mostly kept his cool.  At a press conference held to mark the end of the Parliamentary sitting, Trudeau gave the sort of verbal shrug for which his father became well-known.

Others, like this writer, always had a different view: strongmen admire strength.  Aggressors respond to aggression.  Having cut his teeth in the take-no-prisoners world of New York City real estate – having literally become a star on a TV show whose principal purpose was humiliating people in prime time – Donald Trump was never going to abruptly change course, and adopt the Marquess of Queensberry rules.  Having achieved the presidency by being an angry, racist, pussy-grabbing creep, Donald Trump was never going to stop being angry, racist, pussy-grabbing creep.

In politics, you see, anger sometimes works.  Take, for example, CBS News anchor Dan Rather’s celebrated January 1988 interview with Vice-President George Bush, Sr. – who at that point was losing his bid to secure the Republican presidential nomination. The interview was supposed to be a presidential candidate profile, but Rather went after Bush, aggressively, about his role in the Iran-Contra Affair.  Even Bush’s critics later agreed it was a nine-minute, on-air ambush.  But the way in which Bush handled Rather helped win him the presidency.  Here’s a representative sample:

RATHER: I don’t want to be argumentative, Mr. Vice President.

The Bush-Rather interview-cum-ambush became so pivotal, so much part of U.S. political history, that C-SPAN decided to sell recordings of the confrontation on its web site.  Bush himself came to regard it as the moment when his political fortunes turned around.

In their encounter, Bush is clearly frustrated and even angry.  He stumbles over words, he doesn’t complete sentences.  But it is because of that, not despite that, that the Republican Vice President seemed most truthful. He stammers, he loses his patience, he is anything but smooth – and, therefore, he was authentic.  No longer would he be regarded as an East Coast Ivy League wimp.  The confrontation with Rather catapulted Bush ahead in the polls, and helped to win him the presidency.

Justin Trudeau, as he ponders the darkening horizon at Harrington Lake, should heed the advice of no less than Johnny Rotten.

Time to get angry, Prime Minister.