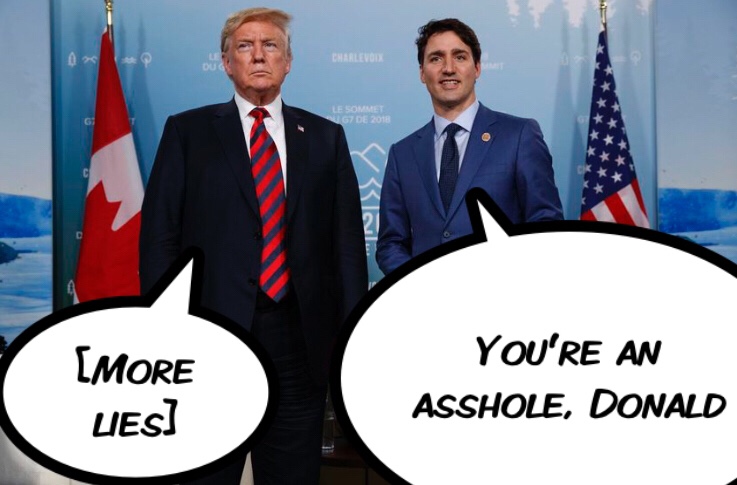 Donald Trump is an asshole

Listen to this Canadian punk rock band, if you don’t believe me:

When Trump eventually got around to Canada, he began by saying “Canada” in a loud, exaggerated voice.

“Canada. You know, Canada: nice guy, nice guy,” he said, extending his arms in a kind of conciliatory gesture. “Prime minister. Justin. I said, ‘Justin, what’s your problem, Justin?’ So: Canada. O Canada. I love their national anthem. O Canada. I like ours better, however. So. No, Canada’s great, I love Canada.”

Trump then launched into his familiar complaint about the post-G7 news conference in which Trudeau repeated his measured criticism of Trump’s new tariffs on Canadian steel and aluminum. Trump baselessly suggested again that Trudeau gave the news conference because he thought Trump could not watch it while stuck on a long Air Force One flight to Asia.

“So I get onto the plane and I see Justin Trudeau, Prime Minister of Canada, saying, ‘Canada will not be bullied by the United States.’ I said, ‘What are we doing here? The fact is that Canada has a 275 per cent tariff on dairy products.’ Little thing called dairy product. Their lumber is a disaster with us. I say, ‘Why aren’t we using our own lumber?’”

The U.S. imported $5.7 billion (U.S.) in Canadian softwood lumber in 2016, according to Trump’s Commerce Department. The two countries are still embroiled in a years-old lumber dispute.

“Energy is a disaster,” Trump continued without elaboration. The White House has never explained the president’s occasional vague complaints about the energy relationship.

Trump then adopted a mocking voice to dismiss Trudeau’s argument that Trump’s steel and aluminum tariffs, officially imposed on “national security” grounds, are an insult to a close military ally like Canada.

Canada’s supply management system for dairy involves a quota on foreign imports and then high tariffs above the quota levels. The Canadian dairy industry argues that U.S. dairy farmers also get signifaicnt help from governments in the form of subsidies.

Trump continued: “I said, look, if you want to do that, we’re going to put a little tariff on your cars.”

When will Justin Trudeau stop taking this shit, and fight back?

Your guess is as good as mine.