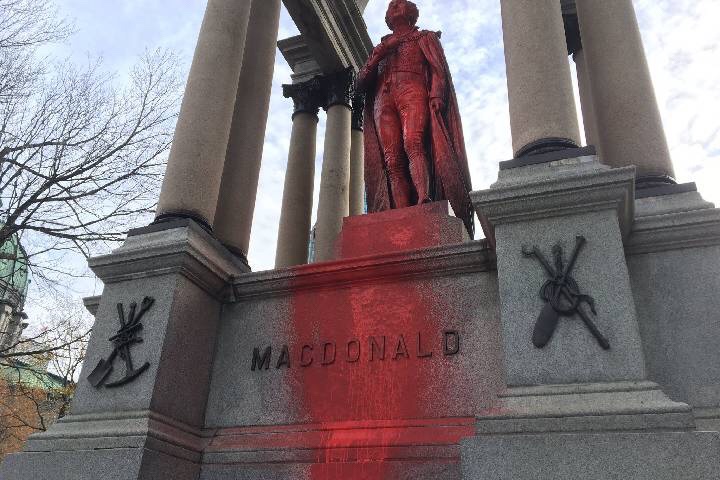 Column: Sir John A. was a racist

BOSTON – What never moves and never talks, but is too often racist?

Statues, of course. They’re lifeless. Down here in America, but also back home in Canada.

Statues paying tributes to notorious historical racists like Robert E. Lee and Stonewall Jackson are still found across the Southern U.S. – and someone even erected one honouring Nathan Bedford Forrest, the first leader of the Ku Klux Klan, just outside Nashville.

Here in Boston, the famous Faneuil Hall is named after an infamous slave trader. And in the city’s North End, there’s a Christopher Columbus statue – which pays homage to a man who also traded in slaves.

In 1492, upon arriving in the Caribbean and on his way to North America, Columbus was greeted as a demi-god by the native Arawak people. By 1495, on a return trip, Columbus was energetically committing acts of genocide against the Arawaks. They no longer exist as a people.

Debates have been raging about such statues for years, but have intensified in the age of the Racist-in-Chief, Donald Trump. Advocates for the racist statues say that these men are part of our history, and we should not tamper with history.

Opponents of these racist statues state, correctly, that such monuments are painful reminders of slavery, violence and genocide. They, we, argue that we should not ever celebrate hatred. They, we, echo the words of former New Orleans mayor Mitch Landrieu, who said such monuments “rewrite history to hide the truth [and] purposefully celebrate a fictional, sanitized Confederacy; ignoring the death, ignoring the enslavement, and the terror that it actually stood for.”

But the fans of racist statues are undeterred. Even up in Canada, where we regularly (and falsely) claim to be a kinder, gentler and less-racist nation than the United States, a controversy has grown around a certain statue of Sir John A. Macdonald.

The City of Victoria recently decided to remove a Macdonald statue on the steps at city hall. Ontario’s government then wrote them a letter, offering to take the statue Victoria that didn’t want. Ontario Tourism Minister Sylvia Jones told the Legislature that “people are complicated, but there is no doubt that 125 years after his death, our first prime minister stands as an important Canadian within the creation of our country.”

And that, certainly, is true. Macdonald is important, and he was “complicated.” But – knowing what we now know about him – he is not a man we should be celebrating like we once did. Statues and monuments should not be built in his honour.

If you disagree, a challenge. Imagine, for a moment, you are a First Nations person – or imagine that you are, like me, father to an indigenous girl. Just imagine that. Then read these words.

Here’s what he said in 1879: “When the school is on the reserve, the child lives with its parents, who are savages. He is simply a savage who can read and write. Indian children should be withdrawn as much as possible from the parental influence, and the only way to do that would be to put them in central training industrial schools where they will acquire the habits and modes of thought of white men.”

And “put them down” Sir John A. did. He gave Canada’s First Nations – the ones who were here first – assimilation, brutality and genocidal residential school. That’s what he gave them, and us.

Instead, let’s build monuments to those historical figures who were not violent racists.

Because statues, as lifeless as they are, can still hurt the living.