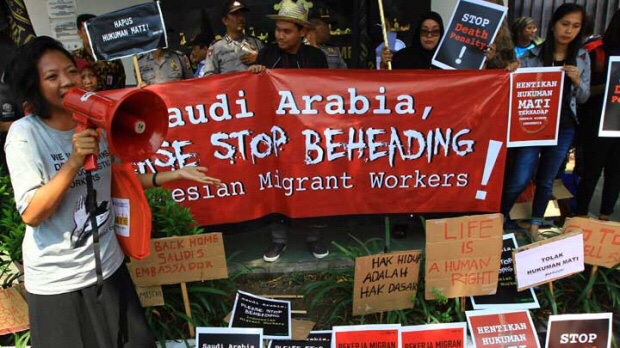 Column: when monsters oppose you

Canada is in a social media war with Saudi Arabia.

It’s not a real war – at least not yet.  Real wars involve bullets and bombs and bodies.  This one is presently confined to Twitter and press statements.  Conscription hasn’t happened just yet.

There has been one truly extraordinary statement made by Saudi Arabia, however, one that promised violence on a grand scale.  A week ago, the state-controlled Saudi media tweeted this at Canadians: “Sticking one’s nose where it doesn’t belong! As the Arabic saying goes: ‘He who interferes with what doesn’t concern him finds what doesn’t please him’.”

Those words were superimposed on a graphic of an Air Canada plane, about to collide with some tall buildings in downtown Toronto.  The message was unmistakable.

We are willing to murder you, Canadians.

It was not subtle.  Continue to criticize Saudi Arabia’s dictatorship, and its unchanging abuse of human rights – as the Department of Global Affairs did, with an innocuous and fairly routine tweet of its own, the week before – and a plane will be dispatched, as on 9/11, and piloted into the CN Tower.  We did it before, Saudi Arabia’s rulers were saying, and we will do it again.

Because, you know, they did.  They did. There were 19 men who carried out the mass murders at the World Trade Center, the Pentagon and just outside Shanksville, Pennsylvania on Tuesday, September 11, 2001. Of the 19 killers, 15 were Saudis.  Their leader, Osama bin Laden, was a Saudi, too.

A U.S. 2016 congressional inquiry found that there had been substantial Saudi involvement in 9/11.  The bipartisan inquiry reviewed half a million documents, interviewed hundreds of witnesses, and released an 838-page report.  Bob Graham, the former Democratic Senator who co-chaired the inquiry, said the hijackers had an extensive support system while they were in the United States.  From the Kingdom of Saudi Arabia.

The definitive probe into the attacks, The 9/11 Commission, concluded that there remained a “likelihood that charities with significant Saudi government sponsorship diverted funds to al-Qaida.”  Those funds were used to carry out the murders of 2,998 people – 24 Canadian citizens among them.

So: the Saudi government’s little tweet, and accompanying infographic, isn’t so far-fetched, is it?  The tyrants who run Saudi Arabia evidently did fund efforts to murder two dozen Canadians, and many more Americans.  They did it before, their tweet strongly suggested, and they are unafraid to do it again.

None of this should surprise us, unfortunately.  The human rights record of Saudi Arabia, according to the watchdog Freedom House, is among “the worst of the worst.”

Saudi Arabia uses corporal punishment against wrongdoers, dissidents and critics.  This includes amputations of hands and feet for petty theft – and fines, floggings, and torture for being gay.  You can also be sentenced to life in prison, or death, for being gay or a “witch” in Saudi Arabia.

Until recently, women were not permitted to drive in the “kingdom.”  Women who protested this were jailed.  Oh, and this: over there, women have been flogged for being the victims of rape, as well.

Amnesty International has reported that the Saudi government habitually uses torture to extract false confessions.  Human Rights Watch has said that the torture includes “beatings, electrocution, and pouring chemicals into the mouth.”

Unsurprisingly, capital punishment is also a regular occurrence in Saudi Arabia, and it is done with the utmost viciousness.  Human Rights Watch reported on one 2015 case in which Saudi security officials “filmed the beheading of a Burmese woman in Mecca in which the swordsman required three sword strikes to sever the victim’s head.”

Sometimes, the Saudis behead as many as a dozen people in a single day.  Afterwards, they will often crucify the headless body, so that it can be displayed publicly.  If one is convicted of adultery, the death penalty is carried out by stoning.  Saudi women are usually the ones stoned to death.

The Saudis execute children, as well. In 2016, the United Nations’ Committee on the Rights of the Child reported that the Saudis were stoning children to death in Yemen, with whom the Saudis are at war.  The UN has also documented that, out of the 47 people executed by the Saudis on Jan. 2, 2016 – their biggest mass execution day in decades – “at least” four were children.

We could recite many such figures, here, but banal statistics do not adequately capture the full extent of the brutality and savagery that is familiar in Saudi Arabia.  Suffice to say Saudi Arabia is one of the three countries who executes people the most – along with China and Iran.

In the past few days, Saudi Arabia’s “royal” goons have said they will be expelling our ambassador, pulling out of Canada thousands of Saudi students and hospital patients, barring Canadian grain exports, and making attempts to tank Canadian bonds in the marketplace.  And, as noted, they have now even hinted at a 9/11-style attack on Canadians.

Asked about all that, our Prime Minister has not blinked.  He has said: “We will continue to speak clearly and firmly on issues of human rights at home and abroad wherever we see the need.”

Canada is quite literally under attack.  As a nation, we need to rally behind the position taken by Prime Minister Trudeau – and all of us need to refuse to be intimidated by a vile mob of homicidal scum posing as Saudi Arabia’s leadership.

Because that’s what they are.