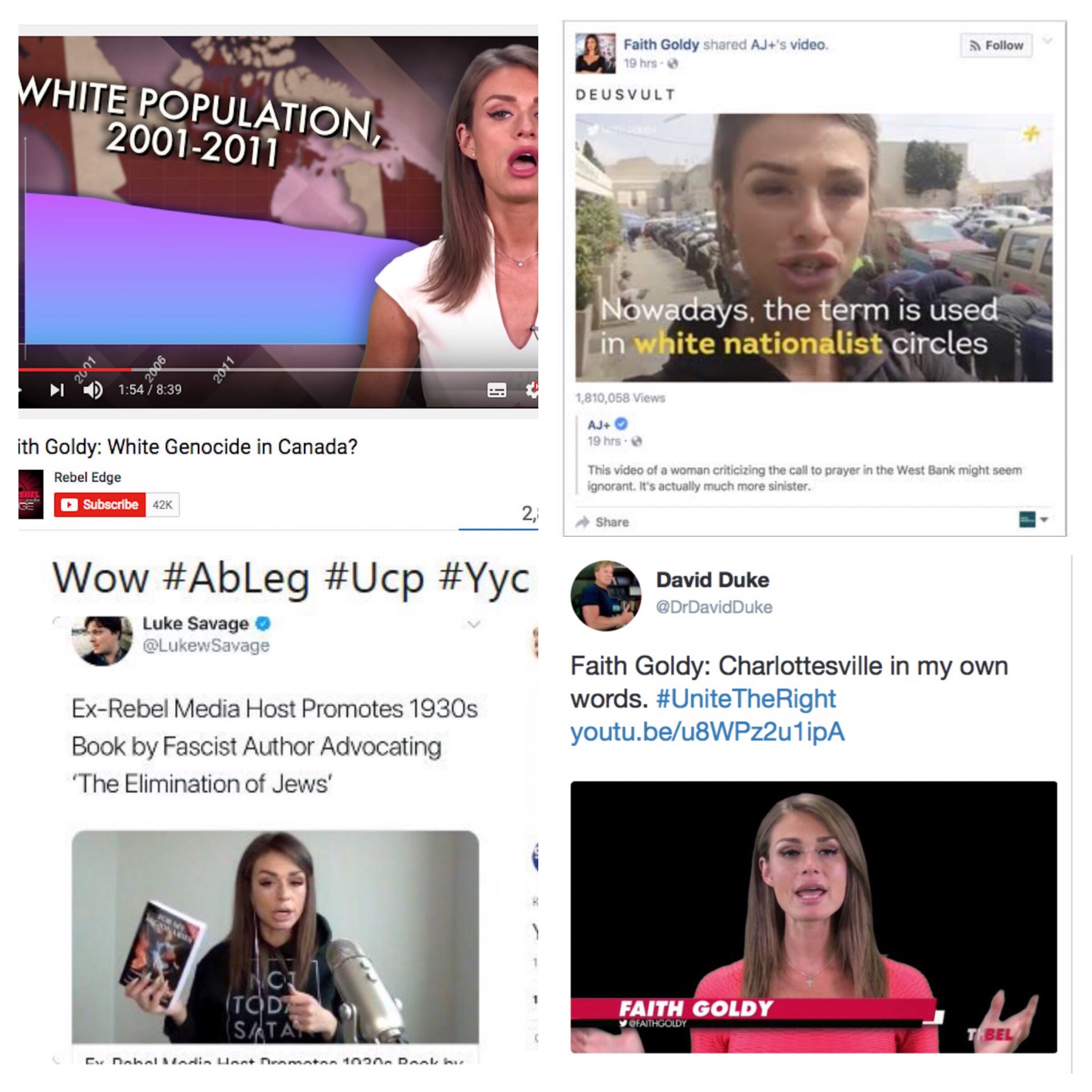 Who is Faith Goldy? (updated) 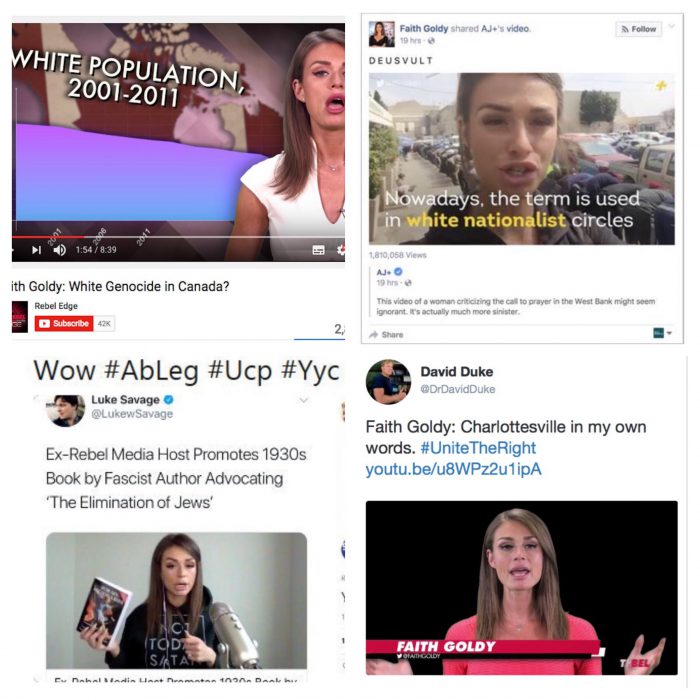 Good question. I remember her.

“Troll with a tan,” someone at the erstwhile network said about her. Uncharitably, but not inaccurately.  That indeed seemed to be the whole package: a suspiciously deep, orange-ish tan, and the sleeveless Fox News mien.  That’s it.

When she first appeared on Sun News, they’d hand her a microphone and tell her to go stand somewhere and pretend to be a reporter.  She’d slap on fake eyelashes the size of bats – and then she’d fire off words and sentences like a speed freak running an auction.  She was terrible.

In time, she’d slow down her delivery, reveal a bit more décolletage, and start sharing her views on-air.  Around the ill-fated right-wing network, it was pretty difficult to sound extreme: for many, fanaticism was the lingua franca.  But Faith Goldy – with figurative snakes slithering thorough her veins, and a clutch of metaphoric maggots in the spot where a heart should be – sounded extreme even to the extremists.

When Sun News slipped beneath the waves, however, no one was surprised to see her clutching at Ezra Levant’s dinghy, the S.S. Rebel.  The rightist trolls – living in their mom’s basement, pawing at their tiny gonads through their Avengers jammies as they eyeballed Faith’s clips on a continuous loop – loved her.  They positively ached for her. Faith was the one they wanted to marry, at a ceremony with lots of Wagner’s Rienzi, Die Meistersinger playing, and possibly an officiant from the Aryan Nations compound in Hayden Lake.

But even as the rebels sought to curry favour with the so-called alt-Right, publishing columns titled “Ten Things I Hate About Jews” and doubting the Holocaust in commentaries, Faith Goldy went further.  She was more of a race-and-religion rebel than anyone at the Rebel.

The breaking point came in Charlottesville, which she was sent to cover for Ezra’s online lunatic asylum – where she’d be seen doing a stand-up not far from the woman who was mowed down by a white supremacist.  That terrible week, Faith appeared on the pro-Nazi Daily Stormer, opining that there was a need for a rise in “white racial consciousness.”  She also proclaimed that National Socialist types have “robust” and “well-thought-out” ideas on “the Jewish question.”  Levant, a Jew and no anti-Semite himself, finally fired her.

After that, Faith abandoned all pretense of restraint.  She was fully alone, piloting in dark, dark waters.

She started reciting The Fourteen Words, the credo of neo-Nazi terrorists in the Order – “We must secure the existence of our people and a future for white children.”  She went on someone’s show to promote a book about “the Jewish menace” – a book which calls for “putting an end to their unnatural, parasitic existence.”  She advocated for pedophile Milos Yiannopoulos, simply because she was encouraged by his brand of foul racism.  She tweeted “the future is Far Right.”  David Duke, the former Grand Wizard of the Knights of the Ku Klux Klan, took notice and commenced cheerily retweeting her stuff.  So did other lowlifes.

So, is Faith Goldy a neo-Nazi?  Who knows.  She certainly counts many Hitlerites among her friends and followers, doesn’t she?

Which naturally leads us to another question, one more relevant:  is Faith Goldy someone with whom Canadian political leaders should ever be seen?

No. No, they sure as shit shouldn’t.

UPDATE: I am reliably told the Premier was not aware of the sorts of things I outline above. I am also told this will never happen again.