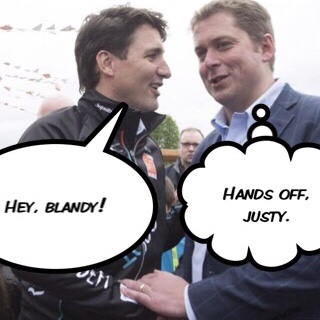 Revealed: what the LPC and CPC war rooms will be using in 2019

Justin Trudeau and Andrew Scheer are agreed on one thing, at least: the next election is going to be plenty nasty.

The 2019 election will be decided less than a year from now. So, the two main party leaders say it’s going to be down and dirty. Should we believe them?

But Blandy Scheer and Petit Justin still insist elbows will go up as the play moves into the corners. So, what can either leader expect? What are the vulnerabilities that the Liberal and Conservative war rooms can be expected to exploit?

Herewith, a helpful list from an old war roomer for staffers to clip and pin to the war room fridge door.

• Trudeau’s Inner Drama Teacher: For three months in the Spring, the Prime Minister and his party dropped precipitously in the polls. If an election had been called at the time, they would have lost it. What happened? In a word, India. The Liberal leader’s trip to India was an unmitigated disaster. When he played dress-up – when he danced like an extra in a bad Bollywood flick – Justin Trudeau enraged and embarrassed Canadians. It suggested to them that he was not ready for prime time, still. Expect the Conservatives to make full and frequent use of the Indian imbroglio.

• Scheer’s Disunited Right: Andrew Scheer’s biggest problem isn’t just Justin. Since the Summer, it’s been Mad Max Bernier. Without a party name, without a party logo, without any party fundraising, Bernier became a major factor when he broke away from Scheer’s Conservative Party. In the intervening months, the problem has grown only worse. Bernie is polling in the double digits, and he hasn’t even really done anything yet. Expect Trudeau to fight to have Bernier included in the leader’s debates, and to draw attention to him at every stop on the campaign trail.

• Trudeau’s Scandal Rap Sheet: Trudeau hasn’t racked up nearly as many scandals as Brian Mulroney – who he speaks to more than any other former Prime Minister, coincidentally enough – but he is no longer as lily-white as he once was. He’s lost ministers to scandal and #MeToo allegations – and Trudeau himself is the first sitting Prime Minister to have ever been found to have violated a federal statute. Expect to hear plenty about the Agha Khan and Bill Morneau’s French villa in the coming months.

• Scheer’s Almost Alt-Right: With Mad Max in his rearview mirror, and anti-immigrant sentiment surging across Western democracy, Andrew Scheer has decided to go Trump-lite. As a result, he has come perilously close to embracing the very anti-migrant bigots he professes to oppose. It is not a good look. Of late, Scheer has been running a pre-campaign that would be a winner in rural Mississippi – but not so much in modern Canada. Watch for Justin Trudeau to shine a spotlight on Scheer’s Almost-Alt-Right tendencies.

• Trudeau’s Less-Than-Stellar Legislative record: Despite a string of achievements in his first majority term – with progressive and historic changes to the Criminal Code, social policy and governance generally – Justin Trudeau’s father was reduced to a Parliamentary minority in 1972. Will Justin Trudeau – whose only significant legislative achievement has been the legalization of cannabis – do likewise in 2019? Scheer’s Conservative war room will almost certainly remind voters that Trudeau’s legislative record has been exceedingly thin gruel.

• Blandy Scheer is just that: Bland. And the Conservative brain trust knows it, too. Canadians don’t know who Andrew Scheer is – and those who do, find him remarkably unremarkable. The Tories have therefore been running ads in prime time – and even during the cherished ad breaks during Hockey Night in Canada – to raise Andrew Scheer’s profile. It hasn’t worked. Scheer continues to resemble a man who is highly uncomfortable in the role in occupies. The Grits will waste no opportunity reminding Canadians that the Conservative leader is a charisma-free zone.

Which leader is most vulnerable? Which war room has the most with which to work?

It’s a mixed bag, as noted. But, on balance, the election remains Justin Trudeau’s to lose.