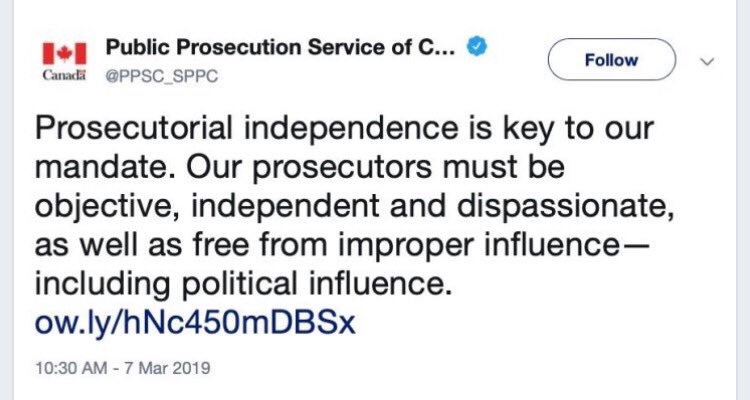 A reminder of what #LavScam is all about

As we enter the week in which Justin Trudeau will almost certainly expel two women who stood up for the principle of prosecutorial independence, here is what the prosecutors themselves had to say about that – and on the very day Trudeau refused to apologize for #LavScam.

They did not issue that tweet by accident. They were not unaware of the impact it would have, coming – as it did – a couple hours after Justin Trudeau angrily refused to apologize for possibly obstructing justice.

It was Canada’s Public Prosecution Service sending up a flare. It was a warning, from those who would know, that something critically important is at risk.

And that is this: the constitutional principle that our criminal justice system needs to be free and fair. The notion that serious cases of corporate corruption, as SNC-Lavalin is, needs to be fought in open court, with lawyers – not in backrooms, with lobbyists.

“Free from political influence.” That is what motivated Jody Wilson-Raybould to do what she did – and, later, for Jane Philpott and Celina Caesar-Chavannes, to do what they did. They lost their careers to that. They have been defamed and demeaned for that.

We must have a criminal justice system that is free from political influence. We must ensure that justice is free and fair, and not for sale to the wealthy.

That is what this scandal is all about. And that is how history will tell it, too.