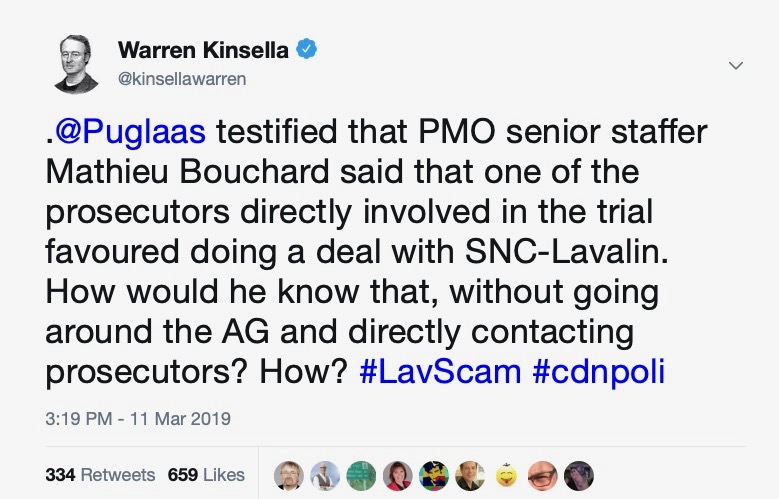 #LavScam latest: did PMO have direct contact with prosecutors in the SNC-Lavalin trial?

That’s what the Globe and Mail is suggesting in another shocker this morning. I have wondered the same thing.

Huge reporting by Fife and Team. And, if true, this moves things closer to obstruction of justice. Big time.

The Prime Minister’s Office will neither confirm nor deny the assertion by former attorney-general Jody Wilson-Raybould that senior advisers to Justin Trudeau had inside knowledge of discussions within the independent Public Prosecution Service about the criminal prosecution of SNC-Lavalin.

Ms. Wilson-Raybould has alleged that the Prime Minister’s Office [PMO] told her chief of staff about an apparent internal dispute between director of public prosecutions Kathleen Roussel and one of the federal prosecutors handling the SNC-Lavalin bribery and fraud prosecution.

In testimony before the Commons justice committee last month, Ms. Wilson-Raybould described a Sept. 16, 2018, conversation between her then-chief of staff, Jessica Prince, and the Prime Minister’s Quebec adviser, Mathieu Bouchard, and senior adviser Elder Marques about negotiating an out-of-court settlement with SNC-Lavalin.

Ms. Wilson-Raybould says she plans to provide follow-up written testimony this week to the committee to show there was high-level political interference in the SNC-Lavalin matter.