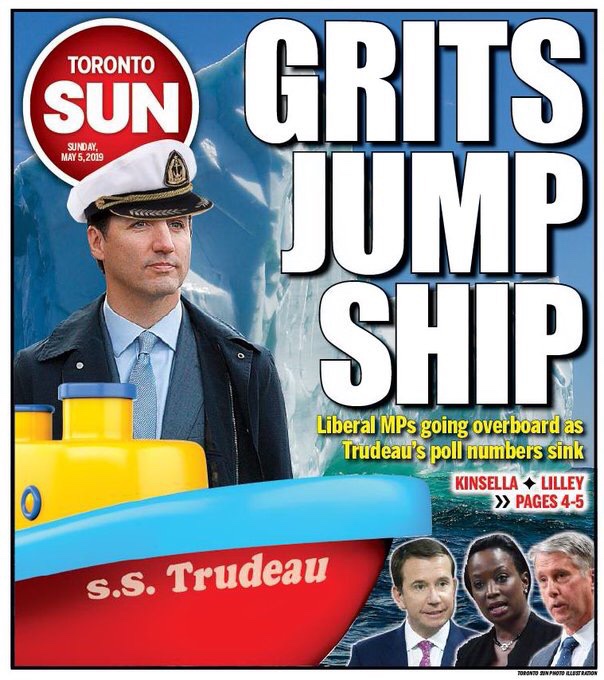 My latest: Trudeau, Liberals, and the inevitable sinking ship metaphor

Cue the soundtrack from Titanic.

Once upon a time, Andrew Leslie was a star Liberal Party candidate. A decorated former commander of the Canadian Armed Forces, Leslie was hailed by Justin Trudeau as proof the Liberals were pro-military.

Way back in 2013, when Trudeau named the 35-year veteran to an advisory committee on international affairs, he said as much.

Having Leslie around showed “a tremendous amount of support and pride for our Canadian Forces,” Trudeau said.

Well, that was then, this is now.

Lots of people thought Leslie was a shoo-in for a senior cabinet post. But it was not to be. Trudeau made Leslie whip, which is the Parliamentary equivalent of a hall monitor. But he never bestowed on Leslie a senior cabinet minister post.

Now we may have learned why.

On Friday, CTV revealed that Leslie is readying to testify in the sensational trial of Vice-Admiral Mark Norman — and against the Trudeau government, no less.

The shocking revelation is bad, bad news for the Trudeau regime. But it’s good news for those of us who still believe in the Rule of Law. And it certainly suggests that Andrew Leslie deserved to be a minister.

Adam Vaughan probably felt he deserved one, too. The former Toronto city councillor was recruited by Trudeau with great fanfare back in 2014. It was a big deal.

Trudeau’s factotums even leaked news of Vaughan’s candidacy to the Toronto Star, which dutifully ran it on the front page like it was a moon landing.

“Adam Vaughan’s decision to seek the Liberal nomination in the Trinity-Spadina by-election was sealed with a handshake over lunch at Le Select Bistro!” the Star gushed. “There’s no question (recruiting Vaughan) is a coup for Justin Trudeau!”

After reading that, Adam Vaughan could be forgiven for thinking he was destined for ministerial limousines and a “P.C.” appended to his surname. But, like Andrew Leslie, it was not to be.

The closest Vaughan ever got to the big leagues was “Parliamentary Secretary to the Prime Minister for Intergovernmental Affairs.” Which, as we say back home in Calgary, is a title that is all hat but no cattle. It’s the square root of diddly.

Bill Blair too. Recruited with fanfare by Trudeau and his fart-catchers, then dropped into the anonymity of the Liberal backbench for years.

A former Toronto Police chief, Blair achieved distinction for overseeing the largest abridgement of civil rights in modern Canadian history, during the G20 summit in 2010. Trudeau — whose family had hands-on experience with abridging civil rights, too — was unperturbed.

“Mr. Blair was a first responder for over 39 years and having him by my side…emphasizes how seriously we take the responsibility of service in this party,” Trudeau said.

And, then, poof! Bill Blair disappeared.

Along with Leslie, other Liberal MPs are disappearing, too. At the moment, a total of 18 ridings won’t have an incumbent Liberal on the ballot in the Fall.

Oh, and Jody Wilson-Raybould and Jane Philpott — the two ministers who resigned from Trudeau’s cabinet because they could no longer abide the corruption and cronyism. And who were later kicked out of caucus by Trudeau for telling the truth to power. Liberals no more.

Trudeau’s spinners, naturally, are all insisting the departures are natural and normal.

The rest of us, meanwhile, can be forgiven for wondering whether the S.S. Trudeau is cruising towards the proverbial iceberg.

And whether those 18 Liberal MPs have decided, wisely, to abandon ship.