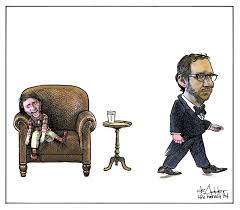 My latest: Butts, back, big bother

Here’s a little-known fact: The “kick me” sign — which is usually affixed to some hapless soul’s back or behind, for laughs — was apparently devised by merry-making Scots during the 16th Century.

They did it to celebrate April Fool’s. “Kick me” thereafter became so popular, it spread to the British Isles and then rest of the world.

And so, this week, the Liberal Party of Canada stuck a “kick me” sign to its collective keester, and invited all of us to do precisely that.

The occasion? Not April Fool’s, although it certainly felt like it could be. No, the “kick me” moment heralded the inauspicious return of Justin Trudeau’s former principal secretary, and his forever-BFF, Gerald Butts.

Butts showed up for some Liberal campaign meeting. People noticed.

Yes, that Gerald Butts. He of the SNC-Lavalin meta-scandal — the one who helped propel #LavScam into hashtag hagiography.

He — the one who told us a million times that he’s a coal miner’s son. Him, the one who also told the chief of staff to the Attorney-General of Canada that Trudeau’s cabal wanted to short-circuit the criminal prosecution of SNC-Lavalin, a Liberal Party donor.

Him, “Gerry,” who famously said of interfering in the coming corruption trial of SNC-Lavalin that “there is no solution here that does not involve some interference.”

Him. Gerald Butts. He’s back.

Now, before everyone starts reaching for the smelling salts, there is a passable pretext to justify the return of Butts. For one thing, he’s smarter than all of PMO put together. And, the wheels started to come off PMO the moment Butts left.

The Liberal Party commenced sliding precipitously in the polls. Patronage scandals sprouted up like weeds. And, of course, there was this stirring bit of oratory, which ranks up there with the Gettysburg Address: “We have recently switched to drinking water bottles out of water, when we have water bottles out of a plastic sorry away from plastic towards paper-like drink-box, water-bottle sorta things.”

So, on the one hand, it makes a bit of sense that Butts is back. But, on the other, it doesn’t at all.

One, Butts — fairly or not — became the face of LavScam. And not in a good way. Former ministers Jody Wilson-Raybould and Jane Philpott came to embody decency, honesty and a belief in the independence of our prosecutorial system.

Butts, meanwhile, came to be seen as a guy who may have done something wrong. Why would he have resigned if that were not so?

LavScam hammered the Liberal Party in public opinion. It shredded Justin Trudeau’s promise of sunny ways. And it left his oft-made claims to be a feminist — to be the indigenous reconciler, to be the guy who’d bring back ethical government — in tatters after he expelled Wilson-Raybould and Philpott for having the temerity to speak up for the rule of law.

“Liberal arrogance” has recurred so many times in Canadian politics, it practically deserves its own entry in Mel Hurtig’s Canadian Encyclopedia series. Liberal arrogance — that Grit belief that they alone know what is best for Canada, and are in fact synonymous with all that is good in Canada — is deadly.

Liberal arrogance has felled many a Liberal government. It is the greatest Grit weakness. And the return of Gerald Butts signals its unfortunate return, in marquee lights.

Butts is back. LavScam is back. Liberal arrogance is back.

Kick them: they deserve it.