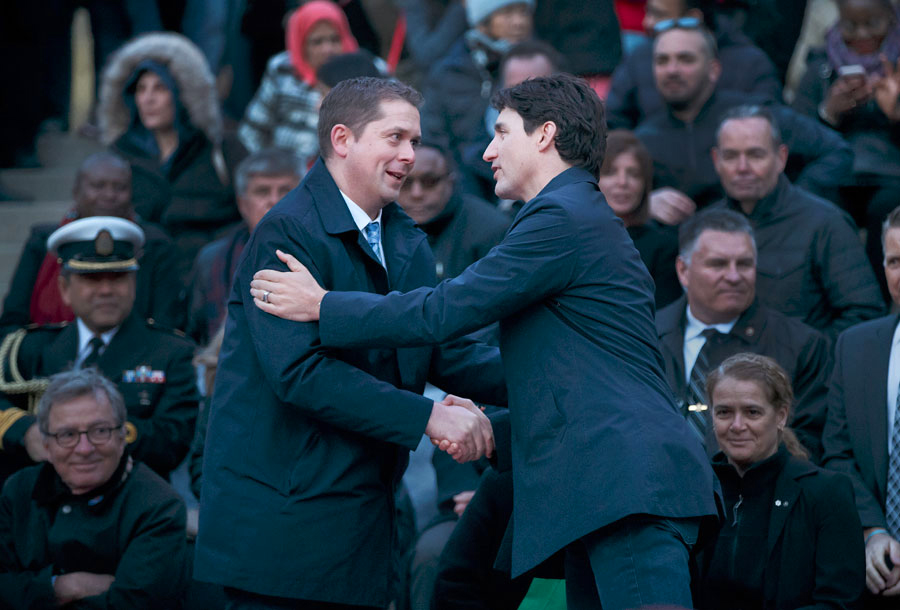 My latest: Trudeau is likelier to win

“I’ve always been fond of dogs,” the Conservative leader declared, and the assembled media throng — the ones who had just informed him that Gallup had him losing, badly, to the Liberals — leaned ever closer.

“And they are the one animal that knows the proper treatment to give to poles.”

The ink-stained wretches burst out laughing, and scribbled away in their notebooks. Dief the Chief had conjured a political quote for the ages.

He was sort-of right, too, about the polls (and poles). Diefenbaker would go on to win, big time, shocking the pollsters and the pundits alike. And 1957 would become one of the biggest upsets in Canadian political history, with the Tories ending nearly a quarter-century of Grit rule.

In the intervening years, plenty of politicos have repeated Dief’s quotable quote, or offered up a variation on it: “The only poll that matters is the one on Election Day.”

And both bromides are true: some pollsters get it wrong. Often. Nowadays, with voters getting harder and harder to reach — because many of them use only cellphones, and cellphone numbers aren’t readily found in directories, like landlines used to be — pollsters are making mistakes. Sometimes big ones.

Remember that 2012 National Post headline, declaring: “PQ headed to comfortable majority,” based on Forum’s numbers? The one just before voting day? It was wrong.

How about the time the Angus Reid Group issued a news release flatly stating the fledgling Wildrose Party would form a majority government in 2014? Remember that? Well, they didn’t. The Alberta PCs did. Handily.

And so on, and so on. Brexit: no one really saw it coming. Trump: ditto. Prime Minister Tom Mulcair, what happened?

The definition of insanity, goes the cliche, is doing the same thing over and over again, and expecting a different result. And here we all go again, with the commentariat eyeballing the polling entrails, and declaring that Justin Trudeau’s Liberals and Andrew Scheer’s Conservatives are in a so-called dead heat, with Scheer slightly ahead. No party is likely to form a majority in 2019, sayeth the punditocracy.

But are they really in a dead heat? And is a majority truly out of reach?

This writer is not so sure. As much as it pains me to say so, a Trudeau win — minority and maybe even majority — presently seems likely. Here’s why: it’s math.

Even though Trudeau may be behind Scheer by a few points — and even though he’s far less popular than he was in 2015, and he has both the Greens and the NDP working busily to steal away votes — Trudeau remains relatively popular where it counts most: seat-rich Central Canada.

Aggregates of several recent polls indicate Trudeau is comfortably in the lead in Ontario and Québec. Based upon those two provinces alone, the Grits may claim as many as 120 seats. Add in Atlantic Canada, where Trudeau has been dominant for months, and the Grit seat count could easily grow to 145 seats.

Could Trudeau win 10 seats in British Columbia? He certainly could. That gets him to 155. Throw in a few territorial and prairie seats — say, eight — and he’s at 163 seats. That’s short of the 170 he’d need to form a majority, true.

But with Green Party leader Elizabeth May openly admitting that she’d be willing to prop up a second Trudeau government, the Liberals may well get all that they need. At that point, all of Andrew Scheer’s dominance in the West won’t matter — because the places where Scheer dominates simply have fewer seats.

In ’57, Dief simply campaigned better in those final days. And that’s why he won big.

Polls or no poles.