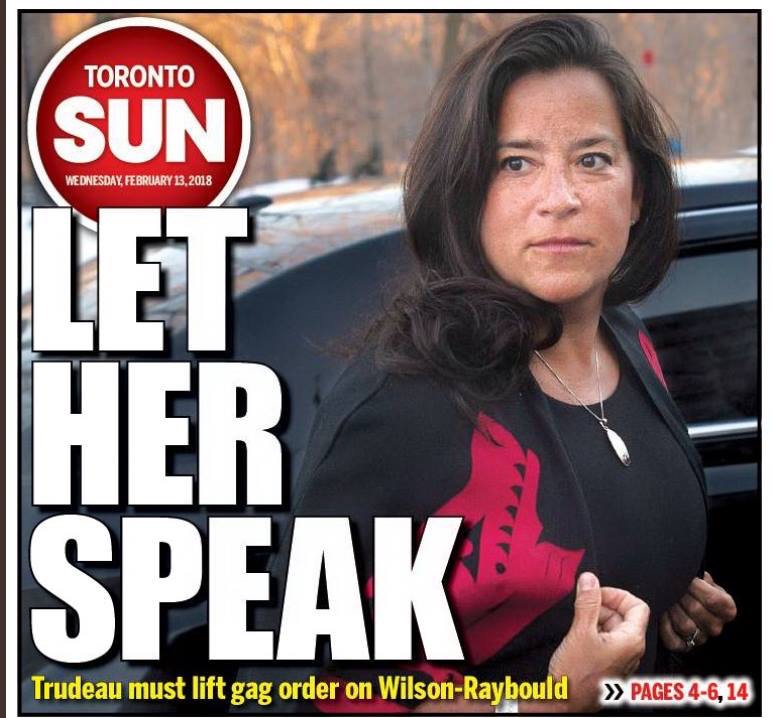 My latest: Trudeau has the power to let her speak

That was the headline on an iconic Toronto Sun headline way back in February: let her speak.

Let Jody Wilson-Raybould – then still a cabinet minister, then still a member of the Liberal caucus – tell Canadians what she knew about Justin Trudeau’s attempts to influence the prosecution of the corruption trial of Quebec’s SNC-Lavalin, a big donor to his party.

It was important. In early February, the Globe and Mail had revealed that Trudeau and ten of his most-senior advisors had attempted to short-circuit SNC-Lavalin’s prosecution no less than 22 times over a four-month period. Wilson-Raybould said no, 22 times.

It would be wrong, she said. It was obstruction of justice, others would say.

Enraged by this proud Indigenous woman who didn’t know her place, Justin Trudeau demoted Jody Wilson-Raybould to Veteran’s Affairs. But the LavScam story wouldn’t go away. The scandal grew. There was a cancer on the Office of the Prime Minister, and everyone knew it.

Desperate, Trudeau relented somewhat. He issued a cabinet decision permitting Wilson-Raybould to speak about some – but not all – of what she knew. She testified before a Commons committee, and what she had to say plunged the Trudeau regime into one of the biggest scandals in recent Canadian political history.

When she testified, however, Jody Wilson-Raybould made one thing clear: she had more to say. She knew things Canadians needed to know.

But still, Trudeau would not let her tell all. And, even now, with the election campaign underway, Justin Trudeau refuses to let Jody Wilson-Raybould speak.

How long the RCMP have been investigating LavScam is unknown. Trudeau and his senior staff lawyered up months ago, so perhaps it’s been that long. But the Mounties are on the case – and Justin Trudeau is doing his utmost to stymie their investigation. He’s adamantly refused to waive the cabinet confidentiality that would let Wilson-Raybould speak to the police.

Reached by the Sun on Friday, Wilson-Raybould said that she has spoken to the police, and more than once. But she says there’s not much she can say to them, or me.

Said Wilson-Raybould to the Sun: “Thanks for your inquiry. I can confirm that I was interviewed by the RCMP on Tuesday of this week. I am not going to comment any further on the nature of those discussions.”

Not because she doesn’t want to, of course. But because Justin Trudeau – the guy who solemnly promised in 2015 to return ethics to Canadian public life – won’t let her. He says the Clerk of the Privy Council – his personal bureaucrat – makes that decision, not him.

It’s unknown if lie detectors beeped to life across Canada, when the Prime Minister said that on day one of the election campaign. They could have. They should have.

His prevarications are cowardly and craven and dishonest. But they’re not the main reason Justin Trudeau shouldn’t be believed.

The main reason is this: Justin Trudeau, personally, was the one who authorized the February 25, 2019 cabinet decision – number 2019-0105 – to waive confidentiality and permit Jody Wilson-Raybould to appear before the Justice Committee. Right in the very first line, it said the decision had been made “on the recommendation of the Prime Minister,” quote unquote.

Him, Justin Trudeau. Not some bureaucrat. Not a member of his cabinet. Him.

Justin Trudeau had the power then to let Jody Wilson-Raybould speak. Now he claims he doesn’t.

And he needs to let her speak – because she knows the truth.