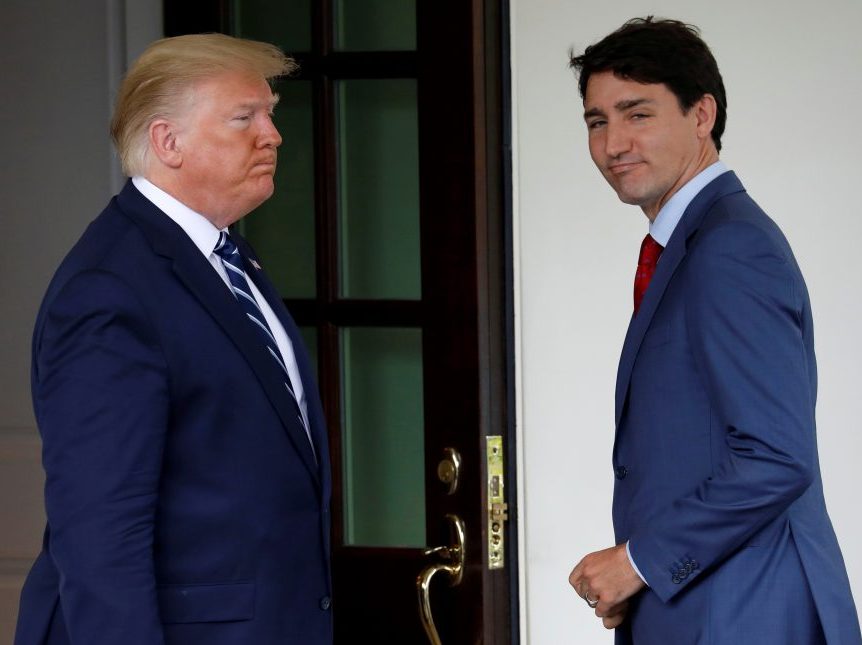 My latest: Trump trumps Trudeau, and why

Say it aloud, so that those still considering voting for Trudeau can hear you.

Because, you know, Donald Trump. The most sexist, most racist, most dishonest US president is more highly regarded than the Canadian Prime Minister. That’s hard to do, but Justin Trudeau has done it.

As far back as March, Trump was doing better than Trudeau. In that month, Ipsos found Trump’s approval rating was 43 per cent. Trudeau’s was 40.

In August, it got even worse. Zogby Analytics revealed that Trump had an approval rating of 51 per cent. Trudeau was “underwater,” Zogby reported, at 43 per cent.

And Toronto Sun pollster John Wright, of DART, has analyzed the data, and come up with the same conclusion as the others. “Trudeau’s personal approval numbers are below Trump’s,” says Wright. “So more selfies won’t help.”

And therein lies the rub. Wright has put his finger on the zeitgeist: this election isn’t remotely about issues. It’s a referendum on Justin Trudeau. And he’s been losing it.

What went wrong? How is Justin Trudeau – once the darling of international media, the beneficiary of Trudeaumania II, and the guy who propelled his party from a Parliamentary third place to first – now facing what HuffPo’s Althia Raj, no less, has declared the “possibility he won’t be Prime Minister much longer.” How did that happen?

Three reasons. The first: he over-promised and under-delivered.

Trudeau did that a lot. On electoral reform, on balanced budgets, on ethical reform, on being the feminist champion and the Indigenous reconciler: in every case, he promised the Earth but delivered only dust.

Trudeau’s true legacy is seen in the LavScam scandal, where he obliterated his credentials as the ethical paragon and liberator of women and Indigenous peoples. There, he cravenly tried to rescue a Quebec-based Liberal Party donor facing a corruption trial – and, along the way, revealed himself more than willing to brutalize two women, one Indigenous, who bravely stood up for the Rule of Law.

Second reason: he thinks he’s far more charming and entertaining than he actually is.

Some time ago, a member of Trudeau’s insular inner circle told this writer that one of their biggest problems was Trudeau’s unshakeable belief that he is funny. “He thinks he’s a comedian,” said this man. “He isn’t.”

Thus, making blackface his go-to party favour. Thus, his puerile penchant for dress-up, even when it humiliates Canadians, as in the infamous Griswolds-style Indian vacation. Thus, his utterly bizarre penchant for making jokes – remember “peoplekind?” – that aren’t merely jokes. They’re jokes that render him one.

Recently, this writer was told by a very senior Grit that Trudeau referred to NDP leader Jagmeet Singh as “Marge Simpson” – presumably a reference to Singh’s turban. (A Liberal campaign spokesman declined to comment about the allegation; an NDP war room member said they were aware of the “joke.”)

Why, why would Trudeau say such a thing? “Because he thought it was funny,” said this Parliamentarian.

The third and final reason that Justin Trudeau is less popular than Donald Trump is neatly, and expertly, mirrored in the Conservative Party’s shrewd attack ad slogan: “Justin Trudeau. Not as advertised.”

That pithy catchphrase, more than anything else, is why Trudeau is plumbing the polling depths, even more than Trump. Canadians have grown to believe that the former drama teacher is, indeed, just an actor.

Donald Trump, as detestable as he is to so many, is at least truthful about who he is. He doesn’t hide it.

Because he’s never as comfortable as when he is wearing a mask.