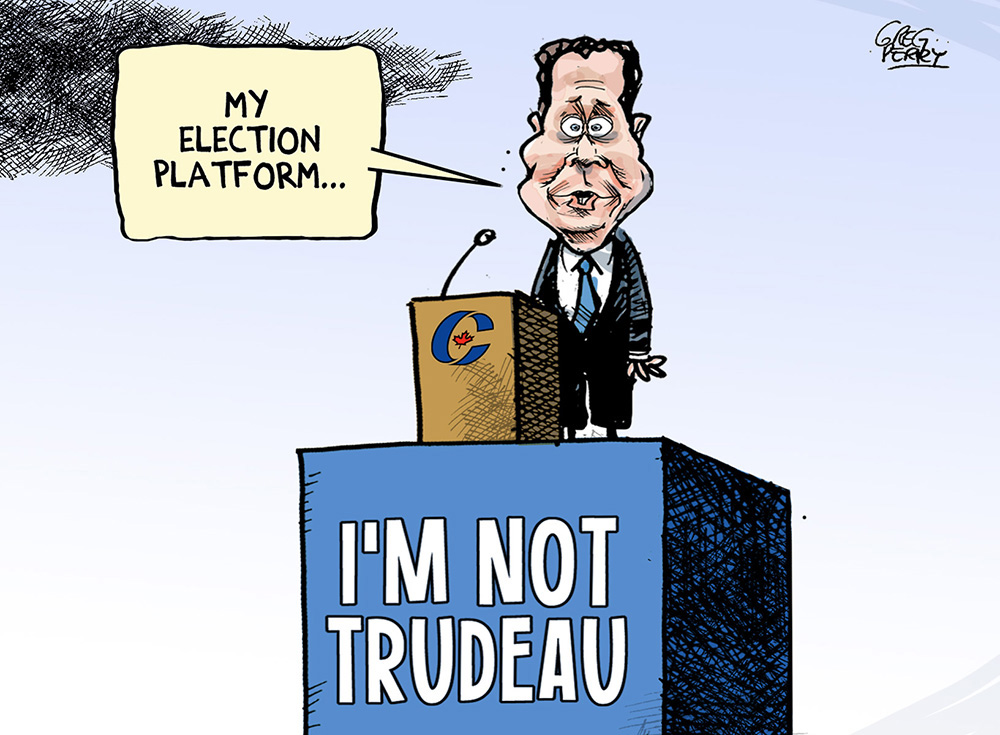 My latest: why isn’t Andrew Scheer way ahead?

You don’t mind if I call you Andrew, do you? It’s better than what I sometimes used to call you, which was Blandy Andy.

I stopped calling you that because you figured out a way to make the bland thing work, like Brampton Bill Davis did. You embraced your inner ordinariness.

You starting hanging out in hockey rinks and you commenced rubbing Timbits all over your torso – which, unlike Prime Minister Blackface, you have never exposed to a grateful nation. You became the Canadian Everyman, and you made it work for you.

The pocketbook stuff, too. That was good, too. You and Hamish concluded, rightly, that voters regard everyone in politics as an unindicted co-conspirators, so you stopped hollering all the time that Justin is a crook. You just kept talking about how hard it is for regular folks to get by, and left the scandalmongering to the media. That was smart.

And the polls bore fruit, sort of. Ipsos says you’re ahead, and you have been for the entirety of the campaign. Nanos says you’re tied with Trudeau for best choice for Prime Minister, which is way better than you’ve been in the past.

But. But, Andrew, seriously?

Why haven’t 110 per cent of respondents declared you their favoured choice for Prime Minister? Why isn’t your party a kabillion points ahead of the Liberals? Why, Andrew, why?

By any reasonable standard, Andrew, Justin Trudeau leads the most corrupt – the most casually evil – government in Canadian history. It is shiftless; it is reckless; it is soulless. It is a mess.

A scan of Trudeau’s press clippings reads like a grand jury indictment.

• In LavScam, he obstructed justice when he tried, repeatedly, to stop the criminal corruption trial of a Québec-based donor to his party.
• He violated conflict of interest laws when he accepted freebies during a junket to the Aga Khan’s private island.
• He lied about electoral reform, and balancing the budget, and improving relations with the provinces and the world.
• He made us an international laughingstock with his Griswolds Vacation India trip, and enraged the world’s largest democracy – our ally and Commonwealth partner.
• And, most recently, he admitted he repeatedly mocked black people by wearing blackface and jumping around like an ape – and he admitted that there’s more of it out there in the ether, but he doesn’t know how much, because he was wasted a lot of the time.

After all that, Andrew – after all that scandal, more of which this newspaper has been investigating for weeks, stay tuned to this bat-channel, everyone – why aren’t you way ahead? Why aren’t you creaming Chewbacca Socks?

Why, to cite just two examples from the past 24 hours, did you attract fewer people at a Brampton rally than Justin Trudeau’s Portuguese Water Dog, Kenzie, gets during a stroll through the park?

Why can’t you put an end to the interminable questions about your CV, and simply joke that you’re so boring, you’re the only guy in Canada who brags about being an insurance broker?

None of it makes sense, Andrew. None of it. You should be playing Fortnite with Hamish about now, getting ready to move into wherever we put Prime Ministers these days.

Instead, you’re fighting to get a decent lead. Instead, your caucus are whispering about the next leader.

It’s crazy, Andrew. But one thing isn’t crazy at all:

You’ve got three weeks left to win this thing.

And if you don’t, you’ll forever be remembered as the guy who couldn’t beat Prime Minister Blackface.