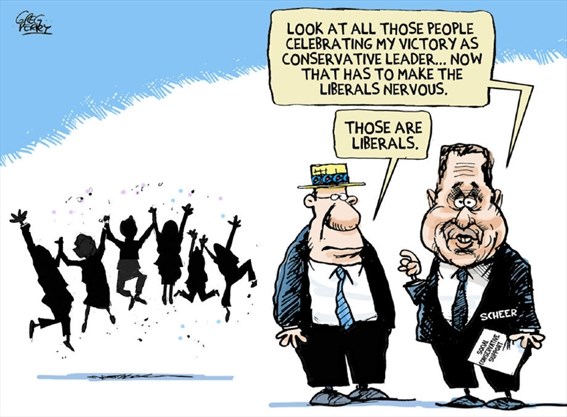 So, back in the good old days, when the dinosaurs roamed the Earth and Jesus was a little fella, you were given a couple chances to become Prime Minister or Premier. That’s how it was done.

Nowadays, with a news cycle of 10 seconds, and Facebook and Twitter and Instagram and all that crap helping us to become crazier than usual, people have become more impatient. Political people especially. These days, you don’t get two shots at the big chair anymore. These days, you get one. That’s it.

Sometimes, partisan political people will want to get rid of you even when you’ve won! Seriously. For example, not long after Jean Chretien won a bigger majority in 2000 than he did in 1997 – his third majority in a row! – Paul Martin’s gang decided that they knew better than several million Canadians.

So, they got together at an airport hotel and resolved to remove Jean Chretien from power.

Chretien got back at them, though. He resigned, alright. But he resigned way after he’d been planning to. Take that, Team Juggernaut.

Anyway. Andrew Scheer is no Jean Chretien, but he is facing a similar problem. Even though he got more of the popular vote, even though he has representation in every part of Canada – unlike all the other party leaders – and even though he got the best result an opposition party has gotten, ever…well, lots of Harper and Bernier people are in the media saying they want him out. You can’t pick up a paper without one of them complaining about Andrew Scheer, who apparently is the anti-Christ now.

One of them, this week, even cited Scheer’s weight as a reason why he lost. I’m not making this up. This Ottawa area candidate – who lost, surprise surprise, and was last seen making videos with the She-wolf of the Clueless, Faith Goldy – said that Scheer needs to lose some weight if he wants to win.

Anyway. That’s how bad it is in the Conservative Party, now. They’ve lost their minds, basically. And they’ve returned to their proud tradition of resembling a circular firing squad.

Justin Trudeau, meanwhile, is maintaining what Brian Mulroney used to call “a courageous silence.” That is, he remembers what Napoleon (or one of those guys) said: when your opponent is destroying himself, don’t interrupt him.

There’s some things that Andrew Scheer and his at loyalists can do, but aren’t doing. They worked for us during Martin‘s attempted coup against a popular sitting Prime Minister, the aforementioned Chretien. I offer them as talking points, free of charge.

One: the judgement of several million Canadians should matter a lot more than that of a few backroom folks and bitter defeated candidates. That’s what I used to say back in the early 2000‘s – that more than 5 million people had voted for Jean Chretien, and they get the final word, in our system of government.

Number two: civil wars only benefit your opponent. In this case, Justin Trudeau.

Minority Trudeau is a very very different guy than he used to be – or at least he’s portraying a different guy very well. Right now, the conservatives – whether they are for Scheer or against Scheer – are persuading lots and lots of people Trudeau and his Liberals are the better option. To wit: the Tories have magically transformed the Grit leader into a Prime Minister presiding over what is effectively a majority government. That’s hard to do, but they’ve done it.

Three: there are rules. For example, every party has a constitution. Every party provides for leadership reviews. In this case, Scheer is facing one in Toronto in just over four months. The chances of him resigning before that review takes place seem to be somewhere between slim and none.

So why don’t his critics work on recruiting an alternative, and work on winning that review in April? They’re not doing that. They’re just giving lots of interviews, to the media, who are lapping it up.  The media always prefer conservative car crashes to conservative happy endings.

Four, back when Martin‘s minions were attempting to drive Jean Chretien out, there was a certain brutal logic to it all. I hate to admit it, but there was.

That is, they were doing it for a reason we all understood: to install Paul Martin in power.

The Martinis at least had an alternative. In the conservative’s case, in the year 2019, it’s not clear who is the alternative to Andrew Scheer. Is it Erin O’Toole? Is it Peter MacKay? Is Rona Ambrose? Who is it?

Five, follow the money. That’ll tell you who is behind this, and that will explain a lot of their motivation. The very people attacking Scheer in the media are the same people who would be kissing his ass if 15 Liberal seats are gone the other way.

That’s it. Fifteen seats. If the Tories had stolen away 15 seats from the Liberals, they would’ve won both the popular vote and the seat count. And Andrew Scheer would be perhaps having tea with the Governor General, talking about the government he intended to form. Fifteen seats.

Anyway, what do I know. I merely worked for Jean Chretien, who won three majorities in a row, and Dalton McGuinty, who won three big election victories in a row. And I last year got to volunteer for that John Tory guy, who won with 70 per cent of the vote in Canada’s largest city. Oh, and I oversaw a mean, nasty campaign against  Maxime Bernier (who lost his seat), and his racist People’s Party (which didn’t win a single seat). What do I know.

Justin Trudeau thanks you.